Combine, announced at WWDC 2019, is Apple’s new “reactive” framework for handling events over time. You can use Combine to unify and simplify your code for dealing with things like delegates, notifications, timers, completion blocks and callbacks. There have been third-party reactive frameworks available for some time on iOS, but now Apple has made its own.

In this tutorial, you’ll learn how to:

You’ll see these key concepts in action by enhancing FindOrLose, a game that challenges you to quickly identify the one image that’s different from the other three.

Ready to explore the magic world of Combine in iOS? Time to dive in!

Download the project materials using the Download Materials button at the top or bottom of this tutorial.

Open the starter project and check out the project files.

Before you can play the game, you must register at Unsplash Developers Portal to get an API key. After registration, you’ll need to create an app on their developer’s portal. Once complete, you’ll see a screen like this: 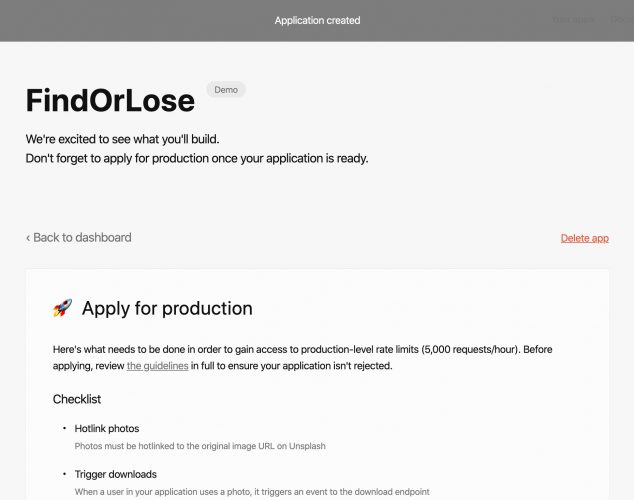 Note: Unsplash APIs have a rate limit of 50 calls per hour. Our game is fun, but please avoid playing it too much :]

Open UnsplashAPI.swift and add your Unsplash API key to UnsplashAPI.accessToken like this:

Build and run. The main screen shows you four gray squares. You’ll also see a button for starting or stopping the game:

Tap Play to start the game:

Right now, this is a fully working game, but take a look at playGame() in GameViewController.swift. The method ends like this:

That’s too many nested closures. Can you work out what’s happening, and in what order? What if you wanted to change the order things happen in, or bail out, or add new functionality? Time to get some help from Combine!

The Combine framework provides a declarative API to process values over time. There are three main components:

Taking each component in turn:

Objects that conform to Publisher deliver a sequence of values over time. The protocol has two associated types: Output, the type of value it produces, and Failure, the type of error it could encounter.

Every publisher can emit multiple events:

Several Foundation types have been enhanced to expose their functionality through publishers, including Timer and URLSession, which you’ll use in this tutorial.

Operators are special methods that are called on publishers and return the same or a different publisher. An operator describes a behavior for changing values, adding values, removing values or many other operations. You can chain multiple operators together to perform complex processing.

Publishers and operators are pointless unless something is listening to the published events. That something is the Subscriber.

Subscriber is another protocol. Like Publisher, it has two associated types: Input and Failure. These must match the Output and Failure of the publisher.

A subscriber receives a stream of value, completion or failure events from a publisher.

After that, the publisher is free to send values to the Subscriber. It might send the full number of requested values, but it might also send fewer. If the publisher is finite, it will eventually return the completion event or possibly an error. This diagram summarizes the process: 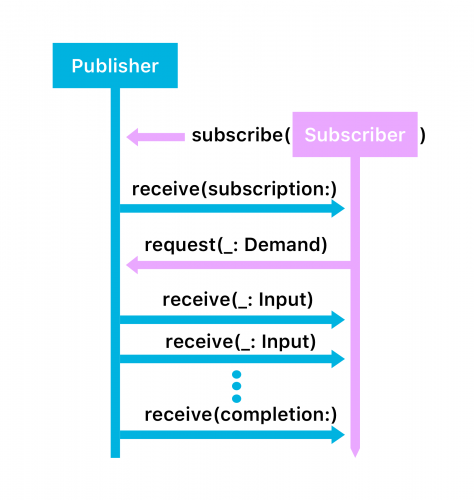 That gives you a quick overview of Combine. Time to use it in your own project!

Name the new file GameError.swift and add it to the Game folder.

This gives you all of the possible errors you can encounter while running the game, plus a handy function to take an error of any type and make sure it’s a GameError. You’ll use this when dealing with your publishers.

With that, you’re now ready to handle HTTP status code and decoding errors.

Next, import Combine. Open UnsplashAPI.swift and add the following at the top of the file:

Then change the signature of randomImage(completion:) to the following:

Now, the method doesn’t take a completion closure as a parameter. Instead, it returns a publisher, with an output type of RandomImageResponse and a failure type of GameError.

AnyPublisher is a system type that you can use to wrap “any” publisher, which keeps you from needing to update method signatures if you use operators, or if you want to hide implementation details from callers.

Next, you’ll update your code to use URLSession‘s new Combine functionality. Find the line that begins session.dataTask(with:. Replace from that line to the end of the method with the following code:

This looks like a lot of code, but it’s using a lot of Combine features. Here’s the step-by-step:

Now, you could have written almost all of this in a single operator, but that’s not really in the spirit of Combine. Think of it like UNIX tools, each step doing one thing and passing the results on.

Downloading an Image With Combine

Now that you have the networking logic, it’s time to download some images.

Open the ImageDownloader.swift file and import Combine at the start of the file with the following code:

Like randomImage, you don’t need a closure with Combine. Replace download(url:, completion:) with this:

A lot of this code is similar to the previous example. Here’s the step-by-step:

At this point, you’ve changed all of your networking methods to use publishers instead of completion blocks. Now you’re ready to use them.

Open GameViewController.swift. Import Combine at the start of the file:

Add the following property at the start of the GameViewController class:

You’ll use this property to store all of your subscriptions. So far you’ve dealt with publishers and operators, but nothing has subscribed yet.

Now, remove all the code in playGame(), right after the call to startLoaders(). Replace it with this:

In the code above, you:

Next, you’ll use the same logic to retrieve the second image. Add this right after firstImage:

At this point, you have downloaded two random images. Now it’s time to, pardon the pun, combine them. You’ll use zip to do this. Add the following code right after secondImage:

As you may notice, scoring doesn’t work any more. Before, your score counted down while you were choosing the correct image, now it just sits there. You’re going to rebuild that timer functionality, but with Combine!

In the code above, you schedule gameTimer to fire every very 0.1 seconds and decrease the score by 10. When the score reaches 0, you invalidate timer.

Now, build and run to confirm that the game score decreases as time elapses.

Timer is another Foundation type that has had Combine functionality added to it. You're going to migrate across to the Combine version to see the differences.

At the top of GameViewController, change the definition of gameTimer:

You're now storing a subscription to the timer, rather than the timer itself. This can be represented with AnyCancellable in Combine.

Change the first line ofplayGame() and stopGame() with the following code:

Now, change the gameTimer assignment in playGame() with the following code:

Build and run and play with your Combine app!

There are just a couple of refinements that are missing. You're continuously adding subscribers with .store(in: &subscriptions) without ever removing them. You'll fix that next.

Add the following line at the top of resetImages():

Here, you assign an empty array that will remove all the references to the unused subscriptions.

Next, add the following line at the top of stopGame():

Here, you iterate over all subscriptions and cancel them.

Time to build and run one last time!

I want to Combine All The Things Now!

Using Combine may seem like a great choice. It's hot, new, and first party, so why not use it now? Here are some things to think about before you go all-in:

First of all, you need to think about your users. If you want to continue to support iOS 12, you can't use Combine. (Combine requires iOS 13 or above.)

Reactive programming is quite a change of mindset, and there is going to be a learning curve while your team gets up to speed. Is everyone on your team as keen as you to change the way things are done?

Think about the technologies your app already uses before adopting Combine. If you have other callback-based SDKs, like Core Bluetooth, you'll have to build wrappers to use them with Combine.

You can mitigate many of these concerns if you start using Combine gradually. Start from the network calls and then move to the other parts of the app. Also, consider using Combine where you currently have closures.

You can download the completed version of the project using the Download Materials button at the top or bottom of this tutorial.

In this tutorial, you've learned the basics behind Combine's Publisher and Subscriber. You also learned about using operators and timers. Congratulations, you're off to a good start with this technology!

To learn even more about using Combine, check out our book Combine: Asynchronous Programming with Swift!

If you have any questions or comments on this tutorial, please join the forum discussion below!