Every month, Kelvin Lau, Chris Pilcher and I feature a data structure or algorithm on this site. If you want to learn more about algorithms and data structures, follow along with us!

In this tutorial, you’ll learn the basics of graph theory, then create an adjacency list in Swift 3.

Note: New to the Swift Algorithm Club? Check out our getting started post first.

A Graph is a useful data structure to capture relationships between objects, made up of a set of vertices paired with a set of edges.

In the graph below, the vertices represents the circles, and the edges are the lines between them. A vertex connects to other vertices by edges. 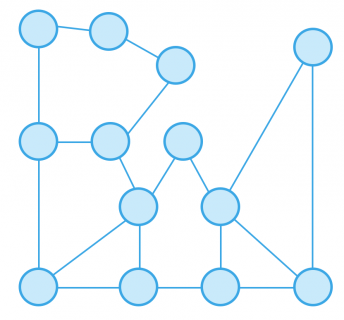 Graphs can come in a variety of shapes and sizes.

Take an airline for example. Imagine a network that shows varying routes for flights. Let the vertices represent the cities and the edges represent a possible route from city to city. Now you can associate a weight to every edge. From this network you can decipher the cheapest flights from San Francisco to Singapore. 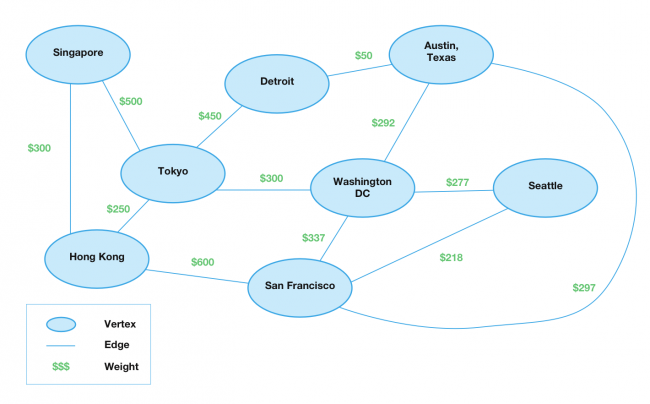 The graph above represents a weighted graph where each edge has a numerical value.

A directed graph can also be bidirectional, where two vertices have two edges going back and forth. For example a flight from Singapore to Hong Kong, has a flight back as well.

You may have come across trees or linked-list data structures. They are a more simplified version of graphs. 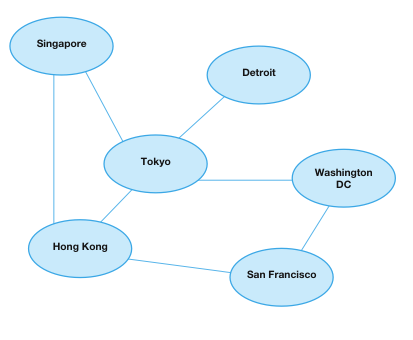 The adjacency list below describes the flight network graph above.

As you can see the Singapore vertex has two edges associated with it. There are outgoing flights from Singapore to Toyko or Hong Kong.

You can develop the adjacency list in many different ways. A few popular approaches are: 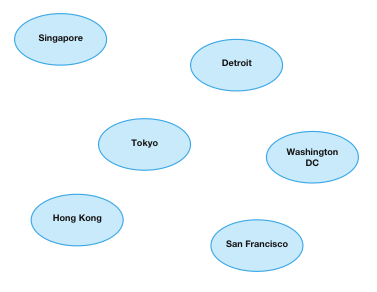 The first thing that graphs need is a vertex. Add the following struct declaration in Vertex.swift:

You’ve declared a struct named Vertex. The vertex holds a generic type called data. So now the vertex can represent pretty much any relationship, whether it’s airline flights, a person, or street addresses.

Next since you are storing a vertex as a custom key in a dictionary, it has to conform to the Hashable protocol. Add the following code below:

Going over the code above:

Now add the following code within the same file:

The CustomStringConvertible protocol allows you to define a custom output. You will use this to verify your adjacency list later. 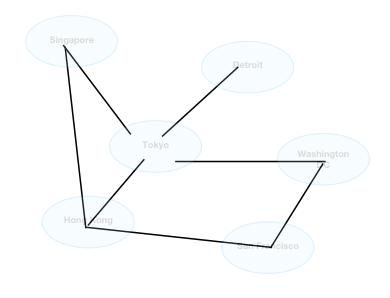 Now to connect every vertex to another vertex, there needs to be an edge between them! Create a new file called Edge.swift under Sources group.

The goal of the enum is to describe whether an edge between two vertices is a directed path, or undirected path.

Now add the following code after:

Going over the properties in Edge:

Like in the Vertex struct, add the following code in Edge.swift:

Edge conforms to the hashable protocol. For similar reasons to the Vertex struct.

Now that you have defined your vertex and edge. You have one more thing you have to do, which is to create an interface to build a graph.

To do this, create a new file called Graphable.swift under Sources group and add the following code:

Going over the protocol:

You will use adjacencyDict to store your graph. adjacencyDict is a dictionary. The key is a Vertex and the value is an array of edges.

Next add the following after the class declaration:

Since the AdjacencyList is also generic, the associatedType is set to T

Note: You may get some errors, because you have yet to conform to the Graphable protocol.

To create a vertex add the following code within the extension right after the Element generic property:

Based on the data passed in you create a Vertex. You check to see if the vertex already exists. If it doesn’t you initialize an array of edges and return the vertex. 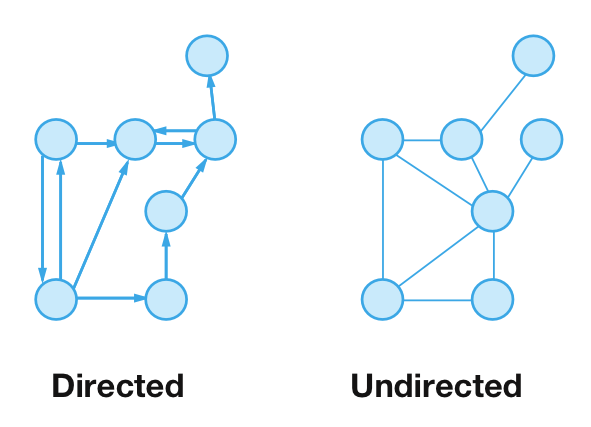 This method takes two vertices, a source and destination with a weight. Let’s go over the code:

In an undirected graph, you can treat it as a directed graph that goes both ways. You call
addDirectedEdge(from:to:weight:) twice, but with the source and destination vertices swapped.

Now you can make use of the two helper methods! Add the following code in the AdjacencyList extension, right after createVertex(data:):

add(_:from:to:weight:) checks to see if the type is directed or undirected and creates the correct edge.

You will now finish up the conformance to Graphable by providing ways to retrieve the weight. 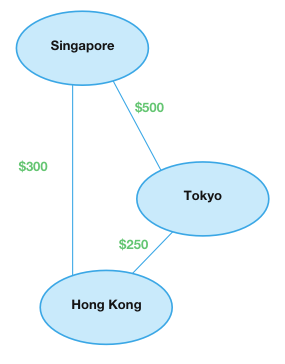 How much is the flight from Singapore to Hong Kong?

Add the following code below the previous method:

Let’s go over how to get the weight:

Next add the following code below:

edges(from:) is straightforward. You access the dictionary based on a given vertex and return the array of edges.

The final piece to the puzzle is visualizing the adjacency list. You must create the final method to fulfill the Graphable protocol.

Add the following code below:

The description property goes through every key-value pair in the dictionary. It prints out the vertex, and all the vertices it’s connected to by an edge.

The adjacency list is finally complete! You must be all excited to use your first graphing data structure!

Now it’s time to go back to the flights pricing network example. 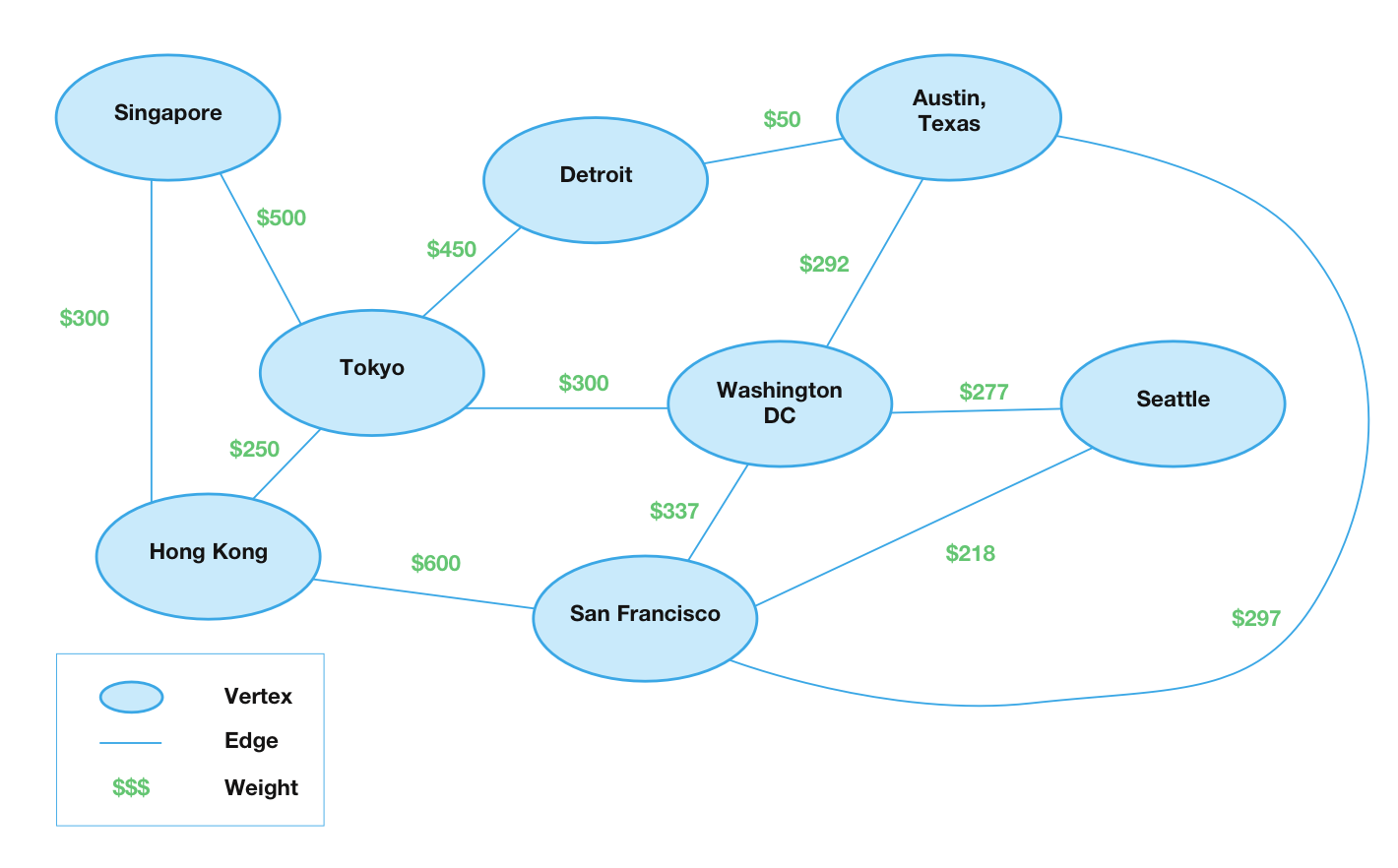 Within the root Playground, add the following code:

The code above creates the flight network pricing graph using the adjacency list. Swift Playgrounds should show the following output:

Use the graph created above to figure out how to use the adjacency list to solve the following problems:

How much does a ticket cost from Singapore to Toyko?

What are the flights going out of San Francisco?
[spoiler title=”Solution”]

Flights going out are the following:

Here is the Swift Playground with all the code above. You can find alternative implementations and more information on graphs in the Swift Algorithm Club’s repository.

I hope you enjoyed this tutorial on making your first graph with an adjacency list! You have only scratched the surface of what graphs are capable of.

This was just one of the many algorithms from the Swift Algorithm Club’s repository. If you’re interested in more, check out the repo.

It’s in your best interest to know about algorithms and data structures. They’re solutions to many real world problems, and could come up during interviews. Plus it’s fun!

So stay tuned for many more tutorials from the Swift Algorithm club in the future. If you have any questions on graphs in Swift, please join the discussion below.

If you enjoyed what you learned in this tutorial, why not check out our Data Structures and Algorithms in Swift book, available on our store?

In Data Structures and Algorithms in Swift, you’ll learn how to implement the most popular and useful data structures and when and why you should use one particular datastructure or algorithm over another. This set of basic data structures and algorithms will serve as an excellent foundation for building more complex and special-purpose constructs.

As well, the high-level expressiveness of Swift makes it an ideal choice for learning these core concepts without sacrificing performance.

By the end of this book, you’ll have hands-on experience solving common issues with data structures and algorithms — and you’ll be well on your way to developing your own efficient and useful implementations.