Learn how to leverage transforming operators in RxSwift, in this tutorial taken from our latest book, RxSwift: Reactive Programming With Swift!

Once again, there are parallels between transforming operators in RxSwift and the Swift standard library, such as map(_:) and flatMap(_:). By the end of this tutorial, you’ll be transforming all the things!

The starter project for this tutorial is named RxSwiftPlayground; you can download it here. Once you’ve opened it and done an initial build, you’re ready for action.

Add this new example to your playground:

Here’s what you just did:

An array of the letters is printed.

RxSwift’s map operator works just like Swift’s standard map, except it operates on observables. In the marble diagram, map takes a closure that multiplies each element by 2.

Add this new example to your playground:

Chapter 5 of the book covers filtering operators, some of them with withIndex variations. The same holds true for transforming operators. mapWithIndex also passes the element’s index to its closure. In this marble diagram, mapWithIndex will transform the element by multiplying it by 2 if its index is greater than 1, otherwise it will pass through the element as-is, so only the 3rd element is transformed. 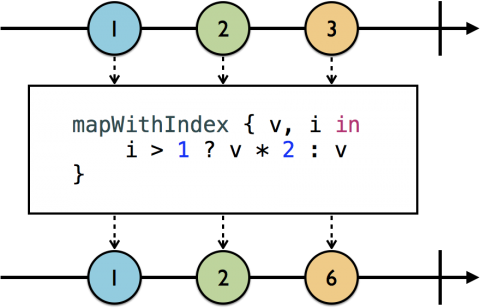 Now add this new example to your playground to implement the example in the marble diagram:

Only the fourth element onward will be transformed and sent to the subscriber to be printed.

You may have wondered at some point, “How do I work with observables that are properties of observables?” Enter the matrix.

Add the following code to your playground, which you’ll use in the upcoming examples:

Student is structure that has a score property that is a Variable. RxSwift includes a few operators in the flatMap family that allow you to reach into an observable and work with its observable properties. You’re going to learn how to use the two most common ones here.

Note: A heads up before you begin: these operators have elicited more than their fair share of questions (and groans and moans) from newcomers to RxSwift. They may seem complex at first, but you are going to walk through detailed explanations of each, so by the end of section you’ll be ready to put these operators into action with confidence. 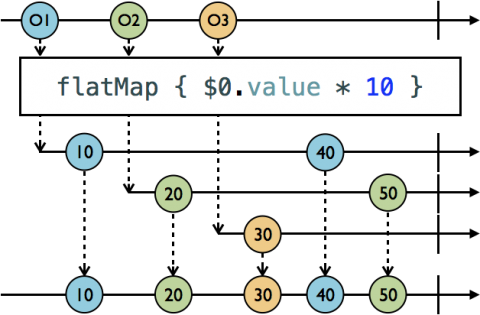 The easiest way to follow what’s happening in this marble diagram is to take each path from the source observable (the top line) all the way through to the target observable that will deliver elements to the subscriber (the bottom line). The source observable is of an object type that has a value property that itself is an observable of type Int. It’s value property’s initial value is the number of the object, that is, O1’s initial value is 1, O2’s is 2, and O3’s is 3.

Starting with O1, flatMap receives the object and reaches in to access its value property and multiply it by 10. It then projects the transformed elements from O1 onto a new observable (the 1st line below flatMap just for O1), and that observable is flattened down to the target observable that will deliver elements to the subscriber (the bottom line).

Later, O1’s value property changes to 4, which is not visually represented in the marble diagram (otherwise the diagram would become even more congested). But the evidence that O1’s value has changed is that it is transformed, projected onto the existing observable for O1 as 40, and then flattened down to the target observable. This all happens in a time-linear fashion.

Finally, O3 is received by flatMap, its initial value of 3 is transformed, projected, and flattened.

flatMap projects and transforms an observable value of an observable, and then flattens it down to a target observable. Time to go hands-on with flatMap and really see how to use it. Add this example to your playground:

Nothing is printed yet. Add this code to the example:

As a result, ryan’s score is printed out.

Now change ryan’s score by adding this code to the example:

Next, add a different Student instance (charlotte) onto the source subject by adding this code:

flatMap does its thing and charlotte’s score is printed.

Here’s where it gets interesting. Change ryan’s score by adding this line of code:

This is because flatMap keeps up with each and every observable it creates, one for each element added onto the source observable. Now change charlotte’s score by adding the following code, just to verify that both observables are being monitored and changes projected:

Sure enough, her new score is printed out.

flatMapLatest is actually a combination of two operators, map and switchLatest. You’ll learn about switchLatest in the “Combining Operators” chapter of the book, but you’re getting a sneak peek here. switchLatest will produce values from the most recent observable, and unsubscribe from the previous observable. 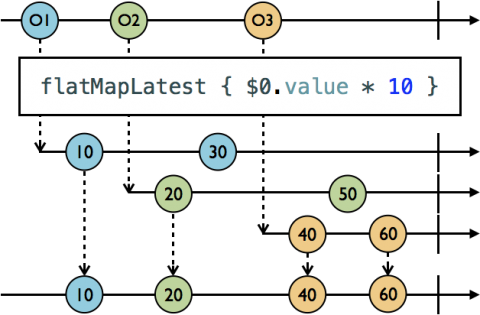 flatMapLatest works just like flatMap to reach into an observable element to access its observable property, it applies a transform and projects the transformed value onto a new sequence for each element of the source observable. Those elements are flattened down into a target observable that will provide elements to the subscriber. What makes flatMapLatest different is that it will automatically switch to the latest observable and unsubscribe from the the previous one.

In the above marble diagram, O1 is received by flatMapLatest, it transforms its value to 10, projects it onto a new observable for O1, and flattens it down to the target observable. Just like before. But then flatMapLatest receives O2 and it does its thing, switching to O2’s observable because it’s now the latest.

When O1’s value changes, flatMapLatest actually still does the transform (something to be mindful of if your transform is an expensive operation), but then it ignores the result. The process repeats when O3 is received by flatMapLatest. It then switches to its sequence and ignores the previous one (O2). The result is that the target observable only receives elements from the latest observable.

Add the following example to your playground, which is a copy/paste of the previous example except for changing flatMap to flatMapLatest:

Only one thing to point out here that’s different from the previous example of flatMap:

So you may be wondering when would you use flatMap for flatMapLatest? Probably the most common use case is using flatMapLatest with networking operations. You will go through examples of this later in the book, but for a simple example, imagine that you’re implementing a type-ahead search. As the user types each letter, s, w, i, f, t, you’ll want to execute a new search and ignore results from the previous one. flatMapLatest is how you do that.

Completing challenges helps drive home what you learned in this tutorial. There are starter and finished versions of the challenge in the exercise files download.

In the accompanying challenge, you have code necessary to look up a contact based on a 10-digit number entered by the user.

Your goal for this challenge is to modify this implementation to be able to take letters as well, and convert them to their corresponding number based on a standard phone keypad (abc is 2, def is 3, and so on).

The starter project includes a helper closure to do the conversion:

And there are closures to format and “dial” the contact if found (really, just print it out):

These closures allow you to move the logic out of the subscription, where it really doesn’t belong. So what’s left to do then? You’ll use multiple maps to perform each transformation along the way. You’ll use skipWhile to skip 0s at the beginning.

You’ll also need to handle the optionals returned from convert. To do so, you can use a handy operator from the RxSwiftExt repo created by fellow author Marin: unwrap. RxSwiftExt includes useful operators that are not part of the core RxSwift library. The unwrap operator replaces the need to do this:

With unwrap, you can just do this:

The starter project also includes code to test your solution. Just add your solution right below the comment // Add your code here.

You can download the final package from this tutorial here.

If you enjoyed what you learned in this tutorial, why not check out the complete RxSwift book, available on our store? 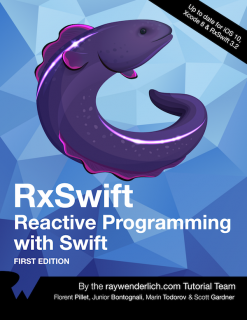 Here’s a taste of what’s in the book:

By the end of this book, you’ll have hands-on experience solving common issues in a reactive paradigm — and you’ll be well on your way to coming up with your own Rx patterns and solutions!

To celebrate the launch of the book, it’s currently on sale for $44.99 - that’s a $10 discount off the cover price! But don’t wait too long, as this deal is only on until Friday, April 7.

If you have any questions or comments on this tutorial, feel free to join the discussion below!