The Swift Algorithm Club is an open source project, where we as a community implement popular data structures and algorithms in Swift.

Every month, the Swift Algorithm Club team will feature a data structure or algorithm from the club in a tutorial format. If you want to learn more about algorithms and data structures, follow along with us!

In this tutorial you’ll walk through a popular search and pathfinding algorithm: depth-first search.

This tutorial assumes you have read our Swift Graphs with Adjacency Lists and Swift Stack Data Structure or have the equivalent knowledge.

If you have been following along with our tutorial series, be sure to check out our breadth first search tutorial; another Swift pathfinding algorithm.

Have ever you seen the movie “Honey, I Shrunk the Kids“?

Imagine yourself being shrunk down to the size of an ant. You fall into an ant nest, and have to find your way out. What strategy are you going to use? 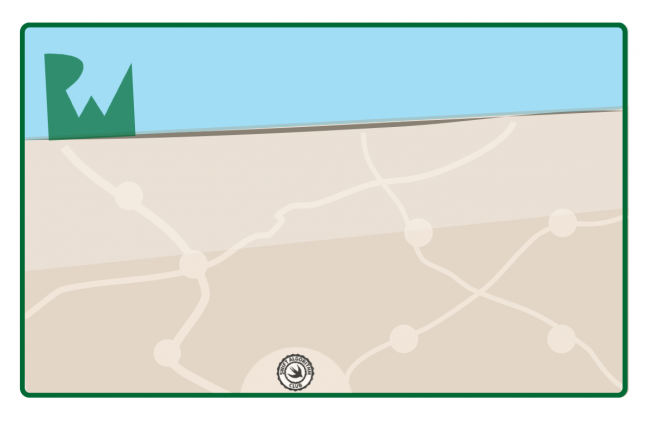 One great algorithm for solving maze problems like this is the Depth-first search algorithm, first developed by Charles Pierre Trémaux.

In this algorithm, you explore a branch as far as possible until you reach the end of the branch. At that point, you backtrack (go back a step), and explore the next available branch, until you find a way out.

In this tutorial you will explore how the depth-first search algorithm works in Swift, and how it differs from Breadth-first search.

There are many use cases for depth-first search such as:

Today you will gain an understanding of depth-first search in Swift through pathfinding.

Imagine the graph below represents a maze, where S is the start location, and E is the end of the maze. Below shows a breadth-first search traversal of the maze.

On each vertex of the graph, breadth-first search visits every vertex’s immediate neighbors before going to the next. Hence the “breadth” of the traversal.

Next shows how depth-first search traverses the maze.

Assuming that the algorithm will always traverse the left side first before the right. Depth-first search will start exploring all the vertices on the left-most branch. If the end of the maze is not found, the algorithm will backtrack to the previous vertex, till it finds another path to explore.

For example once node D reaches node G, node G has no other neighbor, hence the backtrack to node D’s next available neighbor node F. Hence the “depth” of the traversal.

Let’s see what the depth-first search algorithm looks like in Swift.

Start by downloading the starter playground for this tutorial, which has the data structures for a Swift adjacency list and Swift stack included in the Sources group.

Included in the playgrounds is a sample graph used to test the implementation. If you don’t see the diagram, go to Editor > Show Raw Markup to enable it.

Note: If you’re curious how the Swift adjacency list and stack data structures work, you can see the code with View\Navigators\Show Project Navigator. You can also learn how to build these step by step in our Swift Graphs with Adjacency Lists and Swift Stack tutorials.

Given a directed or undirected graph, use depth-first search to find a path between two vertices.

Given the following graph, find a path from S to E:

The path should be S-A-B-D-F-E

Open up the DepthFirstSearch playgrounds, and add the following:

Let’s review the snippet above:

After the TODO, add the following:

The goal is to find a path from the start vertex to the end vertex. So while the stack is not empty, the path has not been found. So begin peeking into the stack’s top vertex, and as long as the vertex is not at the end, check the following:

If the vertex has any edges, you are going to loop through each edge.

This is depth-first search in action, continuing from the left-most branch.

Once the top of the stack contains the end vertex, you have found a path from start to finish!

Finally let’s test out the algorithm. Add the following line at the end of the playground:

This is all you need to implement depth-first search! You should see the following output at the bottom of the playground, displaying the path to the exit:

You think you have depth-first search algorithm nailed down?

From vertex S to vertex C using depth-first search. How many backtracked vertices were there?

Here is the final playground with all the code for the depth-first search algorithm in Swift.

There’s also a recursive version of depth-first search in the Swift Algorithm Club’s repository. So be sure to check that out!

I hope you enjoyed this tutorial on creating pathfinding algorithms with depth-first search in Swift! There are many applications with graphs and this is just one of them.

So stay tuned for many more tutorials from the Swift Algorithm club in the future. In the meantime, if you have any questions or comments, please join the discussion below.

If you enjoyed what you learned in this tutorial, why not check out our Data Structures and Algorithms in Swift book, available on our store?

In Data Structures and Algorithms in Swift, you’ll learn how to implement the most popular and useful data structures and when and why you should use one particular datastructure or algorithm over another. This set of basic data structures and algorithms will serve as an excellent foundation for building more complex and special-purpose constructs.

As well, the high-level expressiveness of Swift makes it an ideal choice for learning these core concepts without sacrificing performance.

By the end of this book, you’ll have hands-on experience solving common issues with data structures and algorithms — and you’ll be well on your way to developing your own efficient and useful implementations.