Moya Tutorial for iOS: Getting Started

Note: This tutorial uses Xcode 10 and Swift 4.2. The libraries it depends upon are not yet updated for Swift 4.2 but can be used without issue. You’ll need to ignore the single warning telling you that Swift 4.2 conversion is available.

There are many moving pieces involved in crafting a beautiful and performant iOS app. One of the most important pieces, if not the most important for a modern app, is networking. As an iOS developer, you may structure your networking layer in many different ways — be it using URLSession or some third-party library.

In this tutorial, you’ll learn about a third-party networking library named Moya, which aims to create a type-safe structure to your network services and requests.

You might ask yourself, “What is this Moya? I already know and love Alamofire!” And if you don’t know and love it, now would be a great time to check out our awesome tutorial on this subject.

Well, this is the great part: Moya actually uses Alamofire while providing a different approach to structuring your network layer. You’ll learn much more about the relation between Moya and Alamofire later in this tutorial.

In this tutorial, you’ll build a neat little app called ComicCards in which you’ll use the Marvel API to show the user a list of comics released in a given week, along with their cover images and other interesting information. When a user selects a comic, your app will generate an image of a shareable card with the comic’s information and image, letting the user upload it to the Imgur service and share it:

Woah — two different API services in one app? Don’t worry! It isn’t as hard as it sounds. Let’s get started!

Note: This tutorial assumes basic knowledge of how HTTP APIs work, though you should be able to easily follow this tutorial even with minimal knowledge. But if you want to know more about HTTP APIs, either refer to the previously mentioned Alamofire tutorial, or refer to this interesting site for more information on REST API basics.

Use the Download Materials button at the top or bottom of this tutorial to download the ComicCards starter project, which already has Moya bundled. Open ComicCards.xcworkspace and not the project file — this is important.

With the project open, check out Main.storyboard to get a general sense of the app structure: 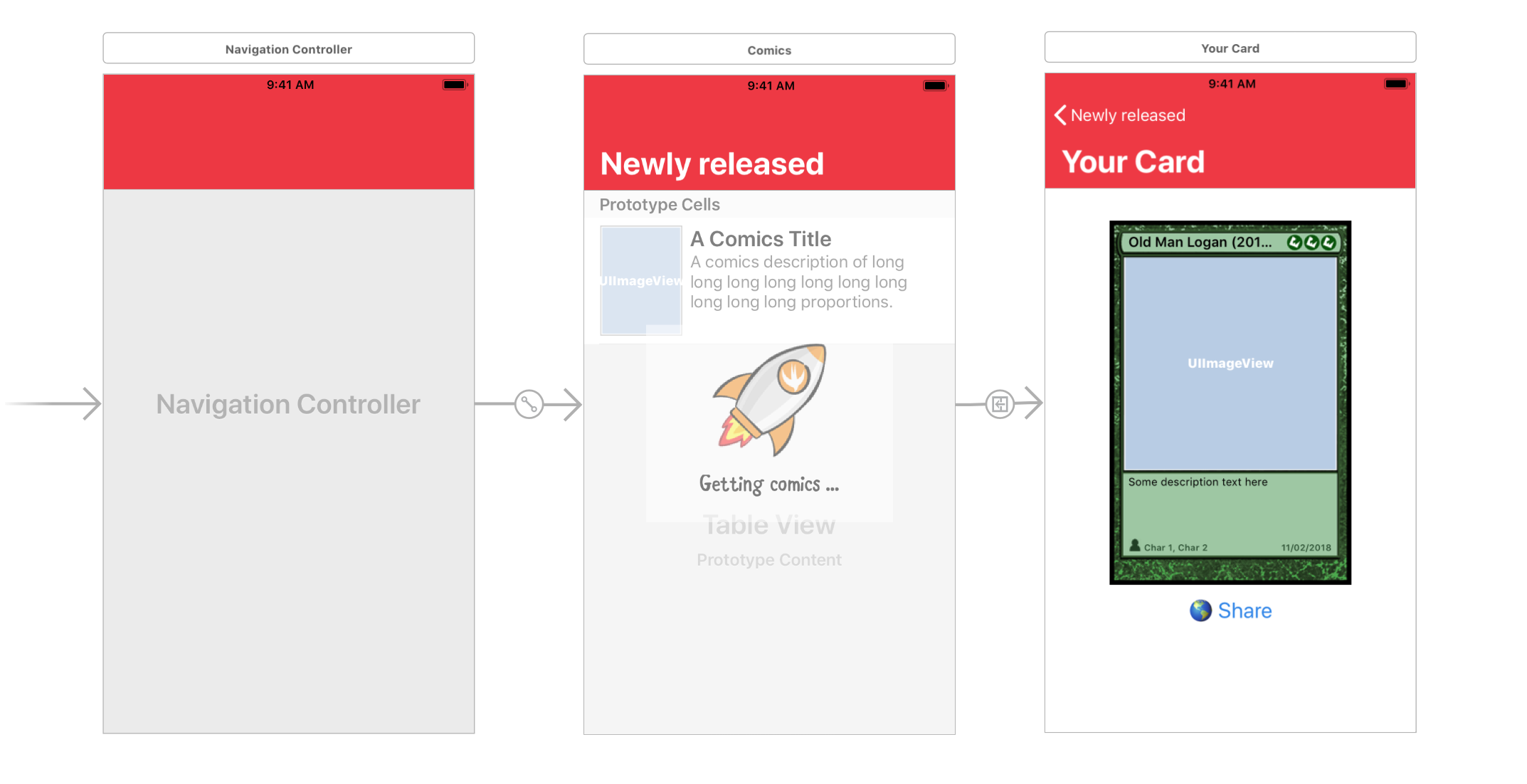 Build and run the project. You should see the following screen: 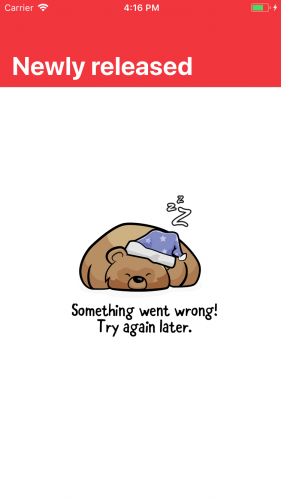 Unsurprisingly, you’re presented with an error screen since you haven’t yet implemented the logic related to fetching the comics from the server and displaying them in your app. You’ll get to adding all of the required code very soon, but first you need to learn a bit about Moya.

Moya: What Is It? 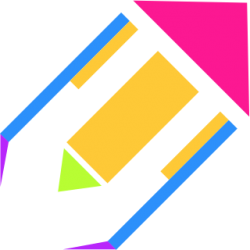 Moya is a networking library focused on encapsulating network requests in a type-safe way, typically by using enumerations (e.g., enum) to provide compile-time guarantees and confidence when working with your network layer, along with added discoverability.

It was built by Ash Furrow and Orta Therox for Artsy’s Eidolon app and quickly gained popularity. Today, it’s entirely maintained by a passionate community of open-source contributors.

How Is Moya Related to Alamofire?

As mentioned in the introduction to this tutorial, Moya and Alamofire are tightly related simply by the fact that Moya doesn’t really do any networking by itself. It uses Alamofire’s battle-tested networking capabilities and simply provides additional abilities, types and concepts to further abstract Alamofire.

Practically speaking, you are using Alamofire! Instead of using it directly, you use Moya, which uses Alamofire under the hood.

Looking at the starter project’s Podfile.lock reveals just that — Alamofire is a dependency of Moya: 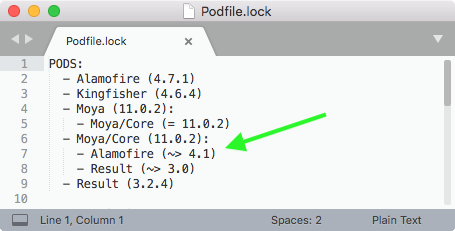 Moya introduces a few unique concepts and building blocks that you should be aware of before starting to write your code. It uses the following building blocks to let you describe your entire networking chain:

Now that you have all of the basic theory out of the way, it’s time for you to write some code!

Marvel API – The API of Heroes

The Marvel API is the world’s largest comic API, created and maintained by Marvel itself.

Start by creating a free account. Once you’re all set, go back to to the My Developer Account page where you’ll find your new public and private keys: 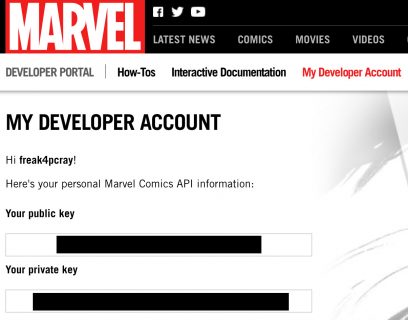 Keep both keys handy; you’ll need them in a few minutes.

Go back to the ComicCards Xcode project. In your project navigator, right-click the ComicCards/Network folder and select New File… Create a new Swift file and name it Marvel.swift: 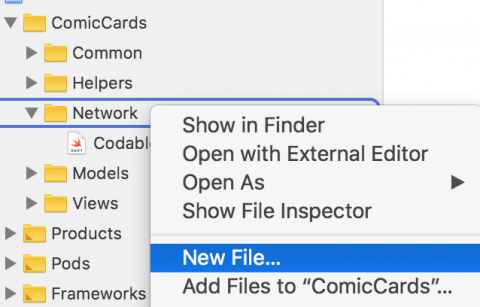 You just created a very simple enumeration describing the API service that you’re going to use:

Now that you have your basic enumeration configured, it’s time to actually make it a target by conforming to TargetType.

Add the following code to the end of the file (after the closing curly bracket):

This might seem like a ton of code, but it’s all simply to conform to TargetType. Let’s break this down:

Note: Notice that you’re using a switch statement in all of your properties even though you only have a single case (.comics). This is a general best practice, since your target might easily evolve and add more endpoints. Any new endpoint will require its own values for the different target properties.

Wow, that was a lot of knowledge to take in! You should feel very proud given the fact that this is most of what you need to know to work with Moya in its most basic form!

There’s only one thing missing in your new Marvel target — the “to do” left in the code, meaning the returned Task.

The Marvel API uses a custom authorization scheme where you create a “hash” from a unique identifier (such as a timestamp), the private key and the public key, all concatenated together and hashed using MD5. You can read the full specification in the API reference under Authentication for Server-Side Applications.

In Marvel.swift, replace task with the following:

Your task is ready! Here’s what that does:

At this point, your new Marvel target is ready to go! Next, you’re going to update ComicsViewController to use it.

Go to ComicsViewController.swift and add the following at the beginning of your view controller class:

As mentioned earlier, the main class you’ll use to interact with your Moya targets is MoyaProvider, so you start by creating an instance of MoyaProvider that uses your new Marvel target.

Next, inside your viewDidLoad(), replace:

The new code does the following:

Build and run the app. The Xcode debug console should show something similar to the following:

Awesome work, you’ve got a valid JSON response from the backend using Moya and your new Marvel target!

Note: It may take several seconds for result to appear in the debug console. 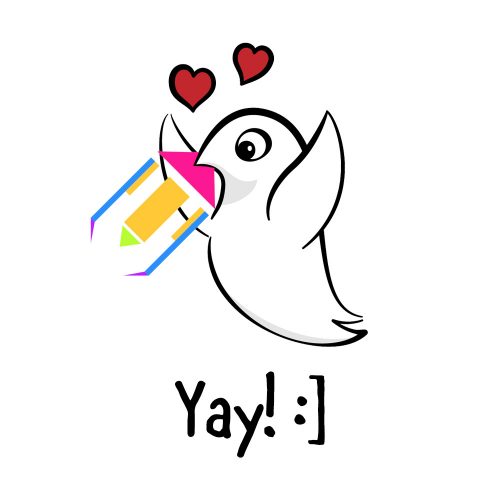 The last step to complete this view controller is actually mapping the JSON response into proper Data Models — in your case, a pre-configured Comic struct.

This is the perfect time to use a different Moya response mapper that maps a response on to a Decodable instead of raw JSON.

You might’ve noticed the JSON response’s structure looks something like:

Meaning two levels of nesting (data, results) before getting to the objects themselves. The starter project already includes the proper Decodable object that takes care of decoding this.

Instead of mapping the object to a raw JSON response, you use a mapper that takes the MarvelResponse generic Decodable with a Comic struct. This will take care of parsing the two levels of nesting as well, which lets you access the array of comics by accessing data.results.

You set the view’s state to .ready with its associated value being the array of Comic objects returned from the Decodable mapping.

Build and run the project. You should see your first screen fully functional! 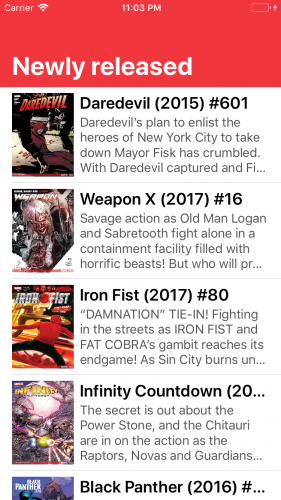 On to the detail view then!

When you tap on a comic, the starter project already has the code for showing a CardViewController and passing it the selected Comic to it. But, you might notice that tapping a comics only shows an empty card without any comic details. Let’s take care of that!

Switch to CardViewController.swift and find the layoutCard(comic:) method. Inside the method, add:

This code updates the screen with information from the provided Comic struct by:

Build and run your app, and tap one of the comics in the list — you should see a beautiful information card: 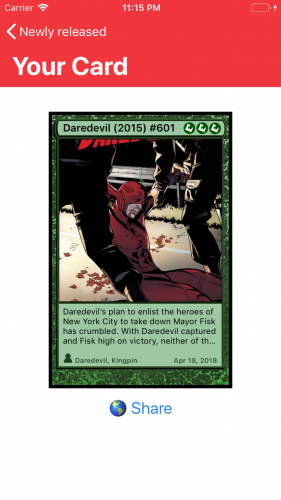 You have two more features to add: uploading your card to Imgur and letting the user delete the card.

For this, you’ll create another Moya target named Imgur that will let you interact with two different endpoints for image handling: one for uploading and one for deleting.

After that, you’ll need to create an Imgur Application. You may use any fake URL for the callback, as you won’t be using OAuth here. You can also simply choose **OAuth 2 authorization without a callback URL**. 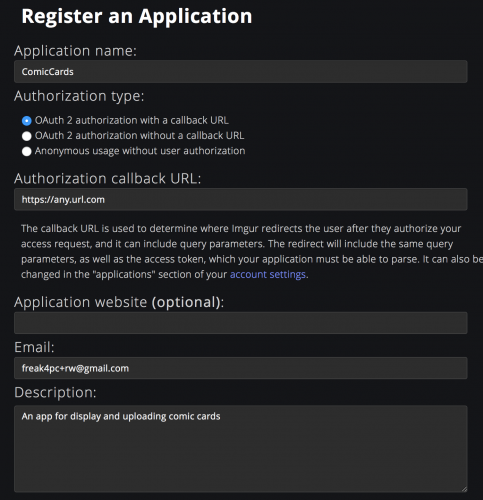 Once you submit the form, Imgur will present you with your new Imgur Client ID and Client secret. Save these for the next step.

Right-click the ComicCards/Network folder and select New File… Then create a new Swift file and name it Imgur.swift.

Add the following code to define the Imgur endpoints that you’ll implement and use:

Similar to the Marvel API, you:

Next, you’ll conform to TargetType. Add the following code right below your new enum:

This should look familiar to you by now. Let’s go through the seven protocol properties of the new Imgur target.

Your Imgur target is done! This concludes the Moya-related code for the ComicCards app. Kudos to you! 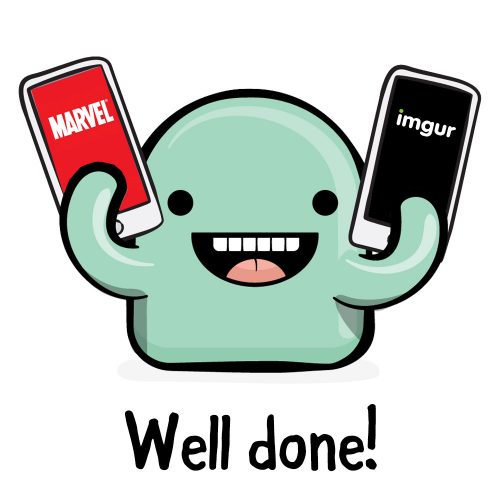 The final step is completing CardViewController to have it use your newly created Moya target.

Like before, you create a MoyaProvider instance, this time with the Imgur target. You also define uploadResult — an optional UploadResult property you’ll use to store the result of an upload, which you’ll need when deleting an image.

At the end of uploadCard(), append the following code:

This big chunk of code definitely needs some explanation, but worry not — most of it should be relatively familiar.

And for your final piece of code for the day: Add the following code inside deleteCard():

This method is rather simple and works as follows:

That is it! Build and run your app one final time. Select a comic and share your image to Imgur. After you’re done with it, you can tap the Delete from Imgur button to remove it.

Note: Something you might notice is that you can only delete the uploaded image as long as you’re in the card view controller. As soon as you leave it, the view controller’s uploadResult will be cleared and the deletehash will be lost. Persisting the hash for any generated images over different sessions is a nice challenge you might want to tackle :].

Taking Moya to the Next Level

Moya is an extremely versatile networking library with too many additional features to fully cover in this tutorial, but they are definitely worth mentioning: 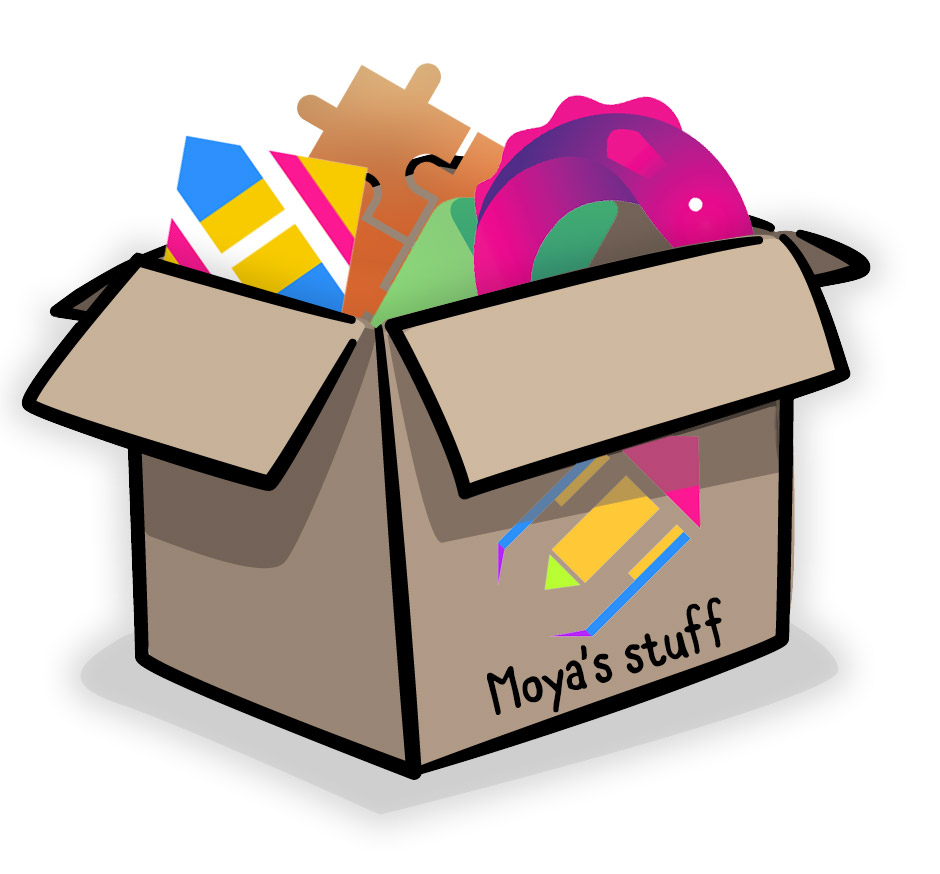 Moya is a feature-packed networing library

You can download the completed version of the project using the Download Materials button at the top or bottom of this tutorial. Don’t forget to set your Imgur Client ID and Marvel public and private keys in the project!

In this tutorial, you’ve learned the basics of using Moya and then some! You have everything you need to take your networking layer to the next level.

The best place to continue your exploration of Moya would be its official documentation page, which is very informative and dives into much more detail on every aspect of Moya, and even has a maintained Chinese translation.

In the meantime, if you have any questions or comments about this tutorial or networking in general, please join the forum discussion below.