async/await in Server-Side Swift and Vapor

Learn how Swift’s new async/await functionality can be used to make your existing EventLoopFuture-based Vapor 4 code more concise and readable.

In Server-Side Swift and Vapor, for the past several years EventLoopFuture has been helping perform asynchronous tasks. While EventLoopFuture is very powerful, it comes with a few disadvantages. First of all, it uses closures, which, over time, make it hard to write clean and readable code. Secondly, it has its own learning curve. Using async/await solves those two problems.

With async/await, your code will look like any other synchronous code: No closures and much nicer to read. Lots of people have already been using all the new async/await features in Vapor, and the community’s feedback so far has been immensely positive.

Note: Full use of async/await requires Swift 5.5, Xcode 13.1 and macOS Monterey or greater.

This tutorial assumes you’re comfortable building simple Vapor 4 apps. If you’re new to Vapor, check out Getting Started with Server-Side Swift with Vapor 4.

You’ll also use Fluent to interact with a PostgreSQL database. If you’re unfamiliar with Fluent and running a database on Docker, check out Using Fluent and Persisting Models in Vapor.

Download the sample project by clicking Download Materials at the top or bottom of this tutorial. The starter project is a simple API that tracks “crates” being traded between different owners. You will change it to use async/await.

Open the starter project in Xcode. You’ll see it contains a variety of files and folders.

The very first line declares the Swift version that your app uses. Make sure it’s at least 5.5:

Scroll down a bit. In the Package declaration, change Trader’s macOS platform to version 12:

Finally, in targets, declare the Run target as an executableTarget instead of a normal target:

This is required for executable targets in Swift 5.5. While you’re waiting for Xcode to resolve Trader’s dependencies, open Terminal. Copy and paste the following into your Terminal window to get your PostgreSQL database going with the help of Docker:

This creates a PostgreSQL database running in Docker called `traderdb`. Now, go back to Xcode. Build and run Trader using the shortcut Command-R or the top-left Play button. Wait for Xcode to run Trader. Then, make sure the console is open. You’ll see a NOTICE indicating Trader’s successful run on address http://127.0.0.1:8080: 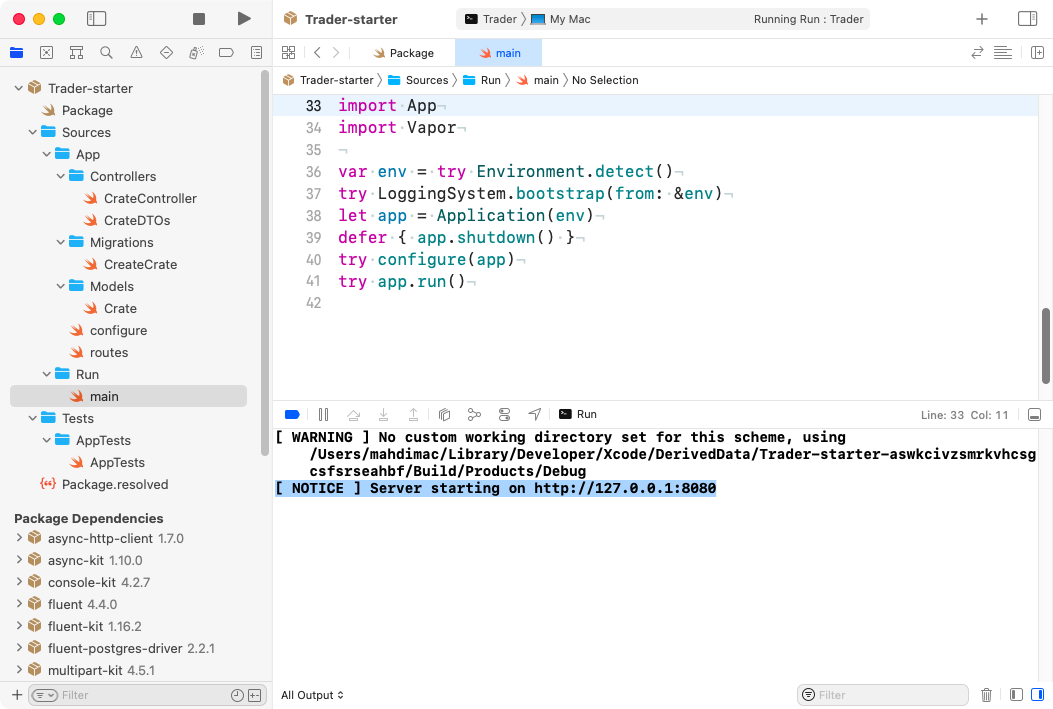 Note: You can ignore the warning about no custom working directory, as it has no impact on this tutorial. If you’d like to resolve that warning anyway, read this section of Vapor’s official documentation.

That’s it for now! Time to learn about the foundation of Vapor’s async/await support.

Bridging Between async/await and EventLoopFuture

Everything you’ll learn in the following sections is implemented using two simple but powerful tools. These enable developers to migrate their code to async/await without much trouble, but you’ll learn that you have even better options most of the time.

The first tool is a useful get() function on top of EventLoopFuture, which enables retrieving the inner value of any EventLoopFuture using the async/await syntax. Consider this code:

You can asynchronously retrieve this function’s value using the new async/await syntax. Notice get() being called:

As you can see, get() easily converts your EventLoopFuture<String> to a simple String.

What if you need the exact opposite of what the get() function does? Sometimes, you don’t have control over a piece of your existing code, or you might want to postpone its migration until another time. At the same time, you still need it to work with other parts of your code that are using async/await.

That’s when the second tool comes in handy. Imagine you want to convert the async/await code below to something that returns an EventLoopFuture:

In Vapor, assuming you have access to an EventLoop, you can simply do the following:

In the code above, first, you simply call the performWithTask(_:) function, which is available on any EventLoop. Then, you perform your async work in its closure, and at last, you return the result of your asynchronous work.

That’s as easy as it gets, but the better news is that the majority of Vapor’s core packages have already been updated with async/await support. Most of the time, you don’t even need to use either of those two functions! :]

All async/await functions are only callable in an asynchronous context. This means you can’t await any async work in a non-async function:

But sometimes you need to bypass this limitation. That’s when Task comes in. In Swift, a Task is a piece of asynchronous work and can be started from anywhere. You can simply initialize a new instance of Task and perform your asynchronous work there:

As you can see, Task also takes in a priority argument. You can specify the priority of the asynchronous task you want to be done, so Swift executes your asynchronous work based on that.

The preference is not to use Tasks yourself because SwiftNIO will have less control over your asynchronous operations in the future. As of Swift 5.5, Swift’s own system manages all async/await works, but SwiftNIO will take over this role in the near future. That’s when you’ll appreciate yourself for not creating new instances of Task everywhere! :]

The fact that, for now, SwiftNIO doesn’t have full control over the execution of async operations has a disadvantage: You can expect your async/await code to be slightly slower than your EventLoopFuture code.

In the code above, three routes are registered:

Look at all(req:), and try to convert it to an async/await function:

Build and run Trader again, and you won’t see any compile errors. Your first conversion of an EventLoopFuture function to an async/await function is successful!

But, that’s not all. Remember earlier you saw that the two helpers won’t be needed in most cases. So remove the call to get():

Build and run again. You’ll see that Xcode successfully runs your app and doesn’t complain about all() not being an async function. How is that happening?

To make using async/await cleaner and nicer, the Vapor team has added a secondary async function for the most popular functions that return an EventLoopFuture. That means, in this case, you have access to two all() functions. The classic one returns an EventLoopFuture, and the modern one is an async function. In the code above, you’re using the async/await variant of all(), and Swift identifies that with no problems.

The same is true about crateGroup.get(use: all). You’ve changed all(req:) from returning an EventLoopFuture to returning an async value. But the Vapor team has already added a secondary async function overload for all route builders. So, here Swift automatically uses the async/await variant of get(use:) and doesn’t complain at all.

This is the whole idea behind the current async/await support in Vapor. The majority of the functions that were using EventLoopFuture now have an async/await version, so you can simply use them and enjoy!

Now, it’s time to convert create(req:) to async/await. create(req:) creates new crates based on the payload you send it and adds them to the database. It currently looks like this:

As you learned, there are two simple steps:

So, after the conversion, this is your function:

So far, you’ve learned all the basics of using async/await in Vapor. You’ll get back to CrateController later to learn some more advanced stuff about async/await.

Becoming More Fluent Than Ever!

Fluent is one of Vapor’s core packages, and they’ve updated it with async/await support. This means you can await any queries that you’d ever want to make.

You’ve already tried a few different Fluent queries in all(req:) and create(req:) functions. Now, it’s time to see how to use async/await for a Fluent migration.

Using async/await in Fluent migrations is just as easy, with only one difference from the previous sections. Open CreateCrate.swift in the Migrations folder. You’ll see the following migration:

By now, you should be able to update the two functions easily on your own. At the end, you’ll have:

Try to build and run Trader. Xcode throws an error that CreateCrate doesn’t conform to Migration:

The Vapor team has come up with a simple solution. They’ve added the AsyncMigration protocol. It’s the same as the Migration protocol, but accepts async prepare(on:) and revert(on:) functions.

Build and run Trader. You’ll see that everything compiles and Trader runs successfully.

Now, it’s time to migrate your remaining routes to async/await. Your current knowledge will lead you to a suboptimal conversion.

In the code above:

Now, you’ll transform tradeOne(on:tradingSides:) to an async/await function. By the end of the process, you should have code similar to this:

So, you need to convert trade(req:) to async/await. Right now, you have:

Here’s what this code does:

Try to migrate this function to async/await. By the end of the conversion, you’ll have something like this:

In the code above, you:

Do the async/await conversions of trade(req:) and tradeOne(on:tradingSides:) look good to you? You might not have noticed, but this async/await code has some differences from the original EventLoopFuture code in terms of execution.

Look at trade(req:) again, and recheck how these two codes compare to each other.

This is your old EventLoopFuture code:

And this is your new async/await code:

A better conversion for trade(req:) is:

Note that you can iterate through each value in a TaskGroup and capture results of each task. You can either use the next() function on a TaskGroup, or use a loop like so:

Now that you’ve fixed the trade(req:) function, look at tradeOne(on:tradingSides:). It contains these two lines:

That’s another piece of suboptimal code! Trader waits once for each crate’s save operation, even though the operations aren’t dependent on each other. To solve that, you can still use a TaskGroup, but that would be overkill. The better way is replacing those two lines with the code below:

You should’ve noticed that although save(on:) performs an async work, there’s no await keyword behind it when assigning it to an async let. async variables are a new addition to Swift. They simply allow assigning an async function’s value to a variable without actually awaiting the asynchronous operation at that point. This is the exact thing happening in the code above. You’re assigning two save operations’ values to crate1Saving and crate2Saving, but you’re postponing the await process to be done somewhere else at another time.

The last line is what awaits on both processes to complete before continuing. There, you assign the save processes to a tuple by declaring (crate1Saving, crate2Saving). Then, you use try await to await both of them simultaneously. The _ = part of the code is there because you don’t need the results of the operations.

For your use cases, TaskGroup and async let were the best solutions, but you can also use the Task.detached(priority:operation:) function to run tasks concurrently. Learning about that will have to wait for another time. :]

You can download the sample project by clicking Download Materials at the top or bottom of this tutorial.

In this tutorial, you learned about the most important Vapor-related concurrency features, but there’s still a lot left to learn.

To learn about all the new concurrency features, check out the book Modern Concurrency in Swift.

We hope you enjoyed this tutorial, and if you have any questions or comments, please join the forum discussion below!