While computers talk to each other using 1s and 0s, you often encounter APIs that communicate in a text-based format. How does an app convert human-readable text into machine-readable binary data?

In this tutorial, you’ll build an app that suggests a list of things to do when you’re bored. Through this process you’ll:

The app consists of two screens. The first screen displays a list of activities to try when you’re bored, while the second screen displays the details of a specific activity.

The starter project uses static data preprogrammed into the app. Throughout this tutorial, you’ll refactor the code to communicate with the Bored API to fetch a list of activities.

Before you start coding, take a closer look at data encoding and serialization.

An object that exists in a program’s memory consists of binary data that a computer can use directly. Serialization is the process of reducing an object to its primitive contents, like numbers, strings and arrays, in a manner that preserves its structure. Encoding a serialized object is the process of converting its primitive contents to an output format by following a specific set of rules.

Consider an object in memory that consists of two primitive values:

Its serialized representation contains its primitive values in a structured format. It’s not important what this representation looks like: What matters is that it contains information about the object so it can be encoded into a specific format.

The object’s encoded representation contains its data represented according to the rules of a specific format, such as JSON, XML, YAML or TOML. Here’s an example of the JSON representation:

Of course, before a computer can use encoded data it must decode the data. 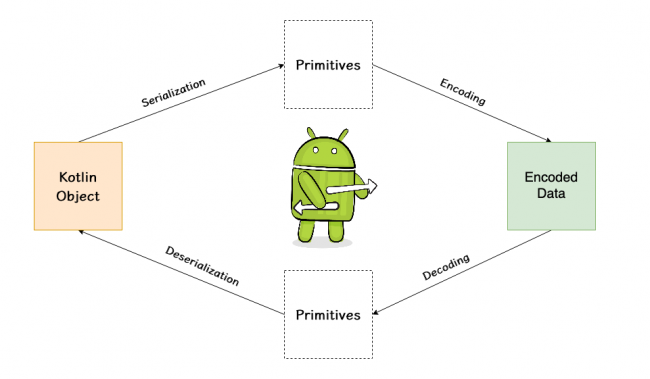 Now that you understand the differences between serialization and deserialization, it’s time to get started with the Kotlin Serialization library.

The Kotlin Serialization library, or kotlinx.serialization, combines a compiler plugin and a runtime API.

Head over to Android Studio to add the following dependencies to your project.

First, open the project level build.gradle and add the Kotlin Serialization plugin to your classpath in the dependencies block:

Then open the app module’s build.gradle and apply the plugin in the plugins block at the top of the file:

Next, add a dependency on the JSON encoder module in the dependencies block:

But wait, why is the Kotlin Serialization library split into a compiler plugin and an encoder module? To understand why you need to learn more about how the library works.

Traditional data serialization libraries use one of two approaches:

In the previous section, you learned about the differences between serialization/deserialization and encoding/decoding. While the compiler plugin provides the former functionality, the library delegates the responsibility of encoding/decoding data into specific formats to separate modules.

Now that you understand the advantages of Kotlin Serialization, it’s time to learn how to use it!

A serializer is a class that handles an object’s serialization and deserialization. For every class annotated with @Serializable, the compiler generates a serializer on its companion object. Use this method to get access to the serializer for that class.

Go to Android Studio, and open BoredActivity.kt in data. In this file, you’ll find the BoredActivity data class that represents an activity to try when you’re bored.

Now you need to make this class known to the Kotlin Serialization library. Import kotlinx.serialization.Serializable and annotate BoredActivity with @Serializable:

Then build the project and see it compile.

Now, if you list the methods on the BoredActivity companion object as shown in the image below, you’ll notice a new serializer() on it that returns an instance of KSerializer. You do not need to modify the code in this step, so you can remove the init method after you’ve observed the method list.

For most use cases, that’s all you need to do. However, the library offers several customization options and utilities for more advanced use cases. The next sections describe these features.

You can use the auto-generated serializer() to gain access to a class’s serializer. Then you can use it with the JSON encoding module to manually serialize or deserialize data as shown in the code example below:

You could also access a class’s serializer by using the top-level generic serializer() as shown in the next example:

The library can serialize all primitive Kotlin values out of the box, including Boolean, Byte, Short, Int, Long, Float, Double, Char and String. It also supports composite types based on these primitives, such as List, Map, Set, Pair and Triple. enums work automatically, too!

You can access the serializer for composite types based on custom types by using the base serializer and passing to it the custom type’s serializer. For example, to serialize List, you can use ListSerializer along with PlatformInfo.serializer():

Similarly, you can use SetSerializer and MapSerializer when needed. If you’re unsure how to construct your serializer, you can always use the top level serializer function as illustrated earlier.

Many encoding formats use snake case variable names to represent data. To model such data with a Kotlin class, you need to break the language’s camel-case style convention. For example, consider the following example of JSON data:

To model such an object, you use the @SerialName annotation instead as shown below:

The @SerialName annotation lets you specify a custom name for the encoded property in a serializable class. It tells the library to map the value of an encoded object’s platform_name field into the PlatformInfo class’s platformName field, and vice versa.

If your model class contains properties that you must not serialize, annotate them with @Transient. A transient property must have a default value. Consider the code example below:

isCurrent is annoted as @Transient and assigned a default initial value.

Transient properties are neither serialized into encoded output nor read from decoded input. Consider the example below that utilizes PlatformInfo:

The above code creates a PlatformInfo object and prints it, the object includes all three properties. Then, the serializer() is used to encode the object into JSON. The transient property is not encoded or included in the JSON.

That’s a lot of information about building and customizing serializers! Now it’s time to put it to use. In the next section, you’ll learn how to add Retrofit to the mix.

In its current state, the app uses static, preprogrammed data. In this section, you’ll use Retrofit with the Kotlin Serialization library to fetch BoredActivity objects from the Bored API, which uses JSON to communicate requests and responses.

The app uses a repository to supply BoredActivity objects to its viewmodels. The repository relies on BoredActivityDataSource to fetch those objects. The starter app ships with two implementations of this interface:

Note: Retrofit is an HTTP client for Android. It’s a popular library used to communicate with web servers over HTTP requests. If you’re unfamiliar with Retrofit, check out this video course: Android Networking: Fundamentals.

In its current state, the app uses the fake data source by default. It’s unsafe to use the real data source right now, as Retrofit wouldn’t know how to parse the JSON responses returned by the API.

To fix this, you need to give Retrofit the ability to handle JSON responses.

Retrofit uses a pluggable system for serializing API requests and responses. It delegates this responsibility to a set of Converter objects that transform data into whatever format applies to the API.

For your app, you’ll use the retrofit2-kotlinx-serialization-converter library by Jake Wharton. It lets Retrofit use the Kotlin Serialization library to convert API requests and responses.

Sync the project to download the dependency. Then open Module.kt in data. It contains a Dagger module named ApiModule that provides various dependencies, including Retrofit. Replace retrofit with the following:

The above code creates converterFactory as a converter factory that uses JSON and adds it to the Retrofit instance. Now that Retrofit can communicate with the API through JSON objects, it’s safe to switch to the source of real data.

Switching to the Real Data Source

In the same Module.kt, you’ll find another Dagger module named DataModule. It binds an instance of FakeDataSource to BoredActivityDataSource.

Build and run. Now, you’ll see data from the real API. Pull down to refresh the list of activities to get new suggestions every time!

While the auto-generated serializers work well in most cases, you can provide your own implementations if you wish to customize the serialization logic. In this section, you’ll learn how to write a serializer manually.

A serializer implements the KSerializer<T> interface. It’s generic type parameter specifies the type of object serialized by the serializer.

The compiler will complain about missing methods in the class. You need to implement two methods, serialize and deserialize, and one property, descriptor.

As you might guess from its name, descriptor describes the structure of the object being serialized. It contains a description of the type and names of the properties to serialize.

Add this property to BoredActivitySerializer:

This descriptor describes the object as a collection of seven primitive properties. It specifies their types as well as their serialized names.

Next, you’ll work with serialize.

Now, you’ll add an implementation of serialize below descriptor:

It accepts an encoder and an instance of BoredActivity. Then it uses encodeXYZElement to write the object’s properties one by one into the encoder, where XYZ is a primitive type.

Note the integer values passed into each encodeXYZElement. These values describe the order of properties. You use them when deserializing an object.

Add an implementation of the deserialize right below serialize:

It accepts a decoder, and returns an instance of BoredActivity.

Note the iteration over index returned by the decoder, which you use to determine which property to decode next. Also, notice that the loop terminates whenever the index equals a special token called CompositeDecoder.DECODE_DONE. This signals a decoder has no more properties to read.

Now that the serializer is complete, it’s time to wire it with the BoredActivity class.

Connecting the Serializer to the Class

To use BoredActivitySerializer, pass it as a parameter to @Serializable as follows:

Build and run. You won’t notice any changes, which indicates your serializer works correctly! Add a log statement in your serializer to confirm that it’s being used. For example, add the following to the top of deserializer: 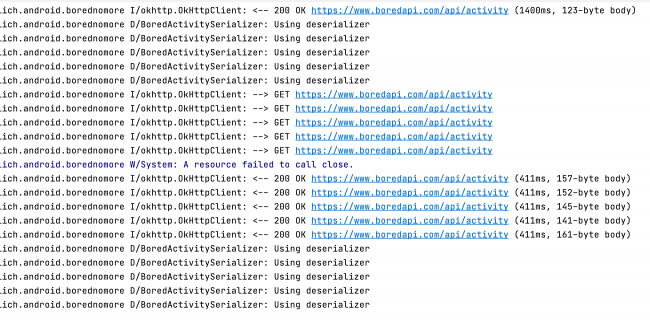 With this change, you complete Bored No More!. Don’t forget to try its suggestions the next time you’re feeling bored. :]

The app ships with a few tests to ensure your serializers and viewmodels work correctly. Don’t forget to run them to ensure that everything is alright! To run the tests, in the Project pan in Android Studio, right click com.raywenderlich.android.borednomore (test). Then select Run Tests in com.raywenderlich…: 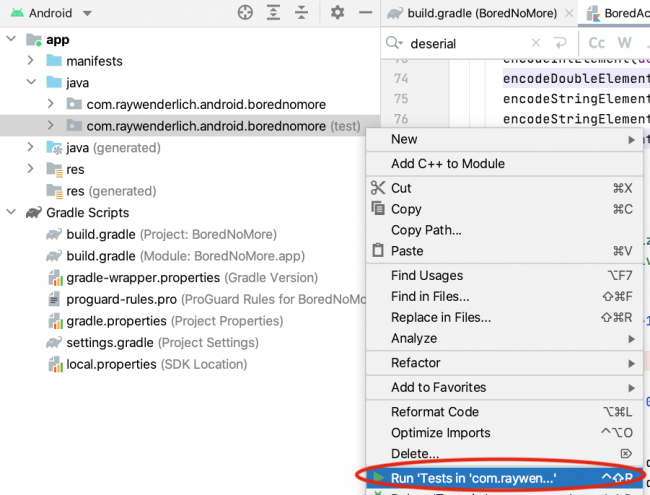 While the Kotlin Serialization library is great, every technology has its drawbacks. This tutorial would be incomplete if it didn’t highlight the library’s limitations. Keep reading to learn about them.

The Kotlin Serialization library is opinionated about its approach to data serialization. As such, it imposes a few restrictions on how you write your code. Here’s a list of a few important limitations:

With that, you’re done with this tutorial!

You can download the final version of this project by clicking Download Materials at the top or bottom of this tutorial.

Congratulations! You’ve learned how to use the Kotlin Serialization library. If you’re wondering where to go next, here’s a list of things to try: