When you’ve meticulously crafted a wonderful UI for your app, making sure it stays intact despite changes in the codebase is important. Among the many paths you can take to achieve this, snapshot testing is an effective option because it’s both lightning-fast and easy to create and maintain.

In this tutorial, you’ll use snapshot testing to validate your UIs, ensuring that code changes haven’t affected the UI you built. You’ll be using a simple library app, Ray’s Library, for creating these tests.

Specifically, you’ll learn how to:

Excited to get started? :]

Use the Download Materials button at the top or bottom of this tutorial to download the starter project.

The starter project is a simple app called Ray’s Library, which shows a list of — you guessed it! — books published by raywenderlich.com. The app was built using SwiftUI and incorporates the SnapshotTesting framework, using Swift Package Manager to test the UI.

Build and run in Xcode. Start by navigating through the app to familiarize yourself with it. The app has two screens, a landing screen and a book detail screen. The landing screen shows a list of books: 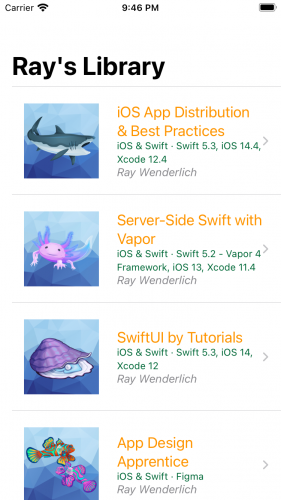 Scroll through the collection of books. Select any book from the list to view its detail screen, which includes a description and ratings: 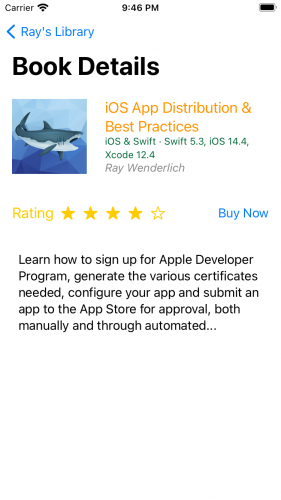 Next, open BookRowView.swift and BookDetailView.swift to learn the UI layout. You’ll write snapshot tests for these UIs in the coming sections. But first, you’ll learn a little more about what snapshot testing is all about.

What Is Snapshot Testing?

Snapshot testing allows you to validate your UIs by comparing a snapshot of the UI at test time with a known valid snapshot of your UI, called a baseline. The test runner compares the current snapshot with the baseline snapshot. If there are any differences between the snapshots, the UI must have changed, so the test fails. 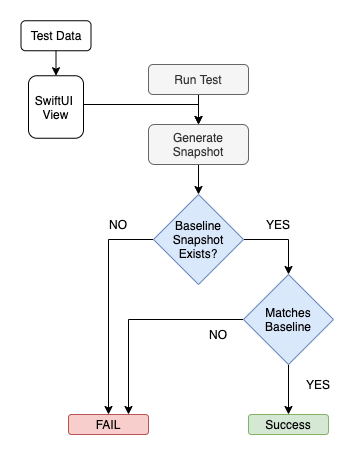 The image strategy takes actual snapshots of your UI as image files, then compares the images pixel by pixel. If the images are different, then the UI changed; your test will fail.

Similarly, the recursive description strategy compares string descriptions of the view hierarchy. If the descriptions have changed, your UI is different. Once again, your test will fail.

For this tutorial, you’ll use the image strategy, where the framework compares the baseline image with the test image. The comparison works by checking for differences in the pixels of both images. Any difference in the pixels will cause your test to fail.

The image strategy supports many options while testing a UIViewController:

The first time you write and run a new test case, you’ll find that the test will fail. That’s because you don’t have a baseline snapshot yet. During the first run, SnapshotTesting will save the baseline snapshot to your project directory.

Subsequent test runs will take a new snapshot and compare it to the baseline.

You’ll start by adding a test case to validate BookRowView. Open BookRowViewTests.swift, and add the following line after the last import statement:

This imports the SnapshotTesting framework into your file.

Next, add these lines inside testBookRowView():

Here you’ve created an instance of BookRowView, which is your SwiftUI view.

A SwiftUI view is a like a plan for a view, not a view itself. So you pass it to UIHostingController as its rootView and return a UIView. Now, you have a view object you can test.

Before you can test your view, you need to generate a baseline snapshot. Add the line below to the end of testBookRowView():

In this case, you passed your view as the matching parameter to tell SnapshotTesting which view you want to test. You’ve also directed SnapshotTesting to use the .image strategy, meaning it will actually save a graphical representation of your UI view at its intrinsic content size.

Note: The image generated with an intrinsic content size might be larger than the iPhone’s width and/or height, depending on its contents. Therefore, it’s best to specify the appropriate size explicitly before testing a view.

Build and run the test by selecting Product ▸ Test from the menu bar or by typing Command-U. This will run all the tests in the test target. 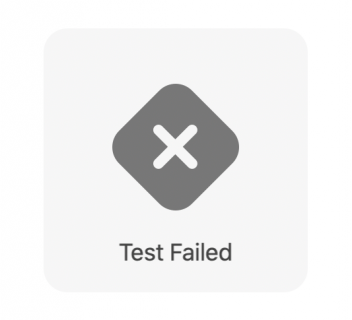 Your test failed. To read the failure message, expand it by clicking the Cross icon.

The test failed because there was no reference snapshot to compare to the test result. Remember, the first time you execute your test case, the SnapshotTesting framework will create the baseline for you. 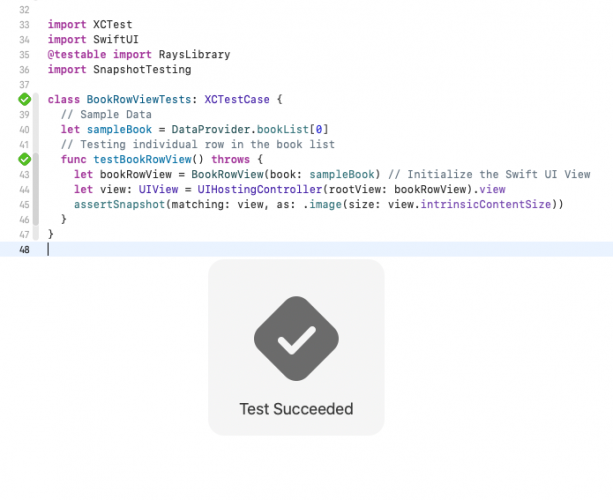 From now on, when you run your test case, SnapshotTesting will take a new snapshot image of your view and compare it to the baseline snapshot. As long as your view code does not change, your test will pass.

But this is software — things always change!

For example, assume the app’s designer wants to add a release date to each book. To see what happens, open BookRowView.swift. Find // Insert release Text and add this code below the comment:

Here, you added a Swift UI Text element that shows the release date of the book. 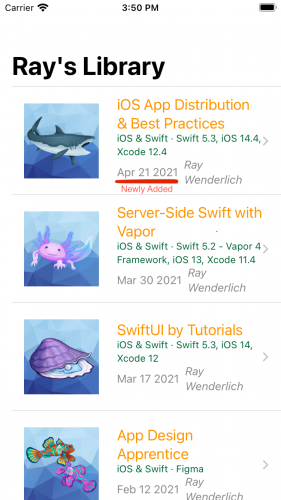 Now, see what the test has to say about this update.

Build and run the test using Command-U. The test fails with an error:

SnapshotTesting reports: Newly-taken snapshot does not match reference. This means that the baseline snapshot, without release dates, doesn’t match the new snapshot, which includes the release dates.

The error message also conveniently includes the paths of the baseline snapshot and the new snapshot. Copy the paths of each and open them in Finder to see the difference.

Note: In Mac’s Finder app, you can go to a specific path by pressing Command-Shift-G and then pasting in the path.

And here’s the new snapshot:

Of course, you expected this behavior. After all, you just changed the UI yourself! So to get your test case to pass, you’ll have to update your baseline snapshot.

Open BookRowViewTests.swift and add the following line just above assertSnapshot(matching:as:):

When you set isRecording to true, it tells the SnapshotTesting framework that you want to create a new baseline snapshot.

Build and run the test.

Your test fails, but SnapshotTesting saved a new baseline snapshot, just like the first time you ran your test.

Now that you have a new baseline snapshot, remove the line isRecording = true again.

You now know how to create a baseline snapshot, and you know how to update it when you make a UI change. But remember, if you see a failed test case when you didn’t intentionally change your UI, be sure to fix the code and not the test case! :]

Now that you’ve thoroughly tested your book row view, you’ll test your book details screen. As you’ll see, the process is similar. However, unlike the previous test, where the system under test was a UIView, you’ll test a UIViewController here.

With a UIViewController, you can set your tests to use different iPhone versions, different screen orientations, different device types and even check how your app works in dark mode.

Setting up Your Testing Environment

With so many different testing options and variations, you might think that you’ll have to create your detail view object over and over again. Fortunately, SnapshotTesting offers a better way to create the system under test.

This code creates an instance of BookDetailView and adds it to UIHostingController as a root view, just as you did in BookRowViewTests. However, by putting this code in setUpWithError(), SnapshotTesting will automatically run this code before each test case. That way, you don’t have to create your system under test in your test case functions.

Now find // Tear down - Clear any instance variables, and add the following below:

Here, you clear the value of viewController after each test run. That way, each test case can start with a brand new BookDetailView.

Build and run the tests. Success! The tests pass, though you haven’t made any assertions yet. 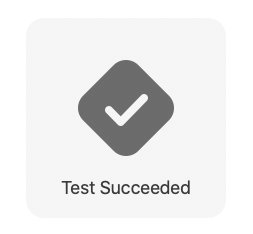 Find testBookDetailViewOniPhone(), then add the following line to the function body:

image(on:) accepts an argument of type ViewImageConfig, which is set to .iPhoneX here. This tells SnapshotTesting to render the viewController at an iPhone X screen size. The default value for orientation is portrait.

Build and run the individual test by clicking the Diamond icon in the gutter.

The test failed, but you’ve now recorded and saved the baseline snapshot.

Run the test again and it will succeed.

Note: You can choose a device to test the view against from a comprehensive list that the Snapshot Testing framework provides.

Similarly, find testBookDetailViewOniPhoneLandscape() and add the following code to its body:

This time, you test your UI on the iPhone X in landscape orientation by passing .landscape to the device object.

Next, find testBookDetailViewOniPadPortrait() and add this code to its body:

This function tests the UI on an iPad Pro 11 in portrait orientation. Here, ViewImageConfig is set to .iPadPro11 with a .portrait Orientation. Simple!

Build and run the tests. The test fails because there was no baseline.

Build and run — now, it succeeds.

As previously mentioned, you can also test how your app behaves with Dark Mode.

Find testBookDetailViewOniPhoneDarkMode() and add the following code to its body:

First, you create UITraitCollection, which sets the UI style to dark mode.

You then pass that trait collection to image(on:traits:), which tells SnapshotTesting to apply dark mode when taking a snapshot.

Note: You can combine a list of UITraitCollections into a single trait collection, which opens up a way to validate a multitude of combinations!

Now, build and run your test. As you saw earlier, the tests fail when there’s no baseline reference of the snapshot.

Again, build and run — all the tests pass! 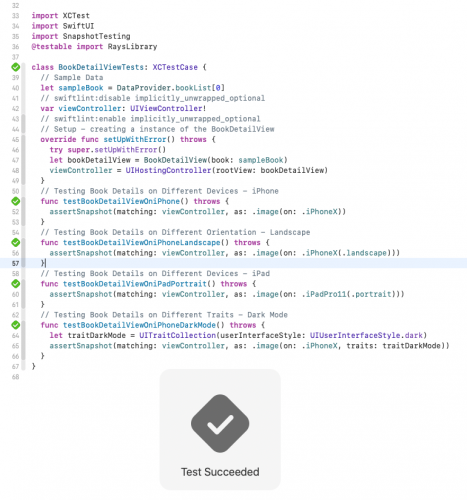 Next time you make a change in the code, you can be sure that the change looks fine on all devices just by running the test cases!

Open BookDetailViewTests and view each of the saved baseline snapshots. They will have the right screen dimension, orientation and traits specified in their respective test cases.

Note: As you add more tests to the project, the snapshots folder can grow in size. If you’re using version control, like Git, use GIT LFS to save the snapshots in the repository.

You’ll find this immensely useful when a snapshot test fails and you have to debug the reason why.

Download the completed version of the project by clicking the Download Materials button at the top or bottom of this tutorial.

Continue learning by adding more tests to the project for various traits as well as by exploring the options and testing strategies available in the SnapshotTesting framework.

Here are a few resources to learn more:

I hope this tutorial has provided an overview of how to use snapshot testing and the benefits it has to offer. If you have any questions or comments, please join the forum discussion below!