Nominate great apps to be featured in our Best iOS 7 Animations article.

In iOS 7, Apple revolutionized the way developers designed their apps. With the emphasis on clarity, deference, and depth, developers needed to find a way to redesign their apps to stand out in this entirely new app ecosystem.

While many apps have simply changed to fit into the look of iOS 7, others have embraced it. One powerful technique these successful apps have used is animation.

Animation is a fundamental tool developers use to give their app personality and to create an engaging and unique user experience.

With fun and interesting animations, apps stand out more easily and the user is more likely to want to use the app.

A while back, you requested that we write an article titled “Best iOS 7 Animations” in a tutorial poll. Well, to do this properly we need your help!

Almost a year after iOS 7 was revealed, we are searching for the apps with the best animations. Both simple and complex animations can be good candidates, as long as the animations add to the overall user experience and personality of the app.

We ask you, the readers of RayWenderlich.com, to nominate the app(s) you have seen that have the greatest animations. The App Store is too large to find all the gems ourselves, which is why we need YOU to help us pick out the most deserving apps. 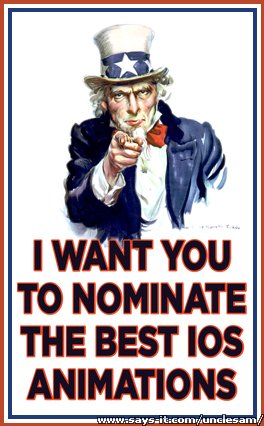 To start you off, here are 10 hand-picked apps that have animations that complete the user experience. In this article, only one animation from the app will be shown. When the winners are selected, you will be able to see more of the great animations the apps feature.

Dark Sky is a weather app that has great animations when scrolling between views. The subviews all enter and exit the screen in an ascending order. They also fade in and out when you slide the scroll view.

At the end of the animation, there is also a little pulse to highlight the current date. Little animations like that go a long way in giving an app personality.

Tweetbot 3 is a Twitter client that distinguishes itself with its creative user interface and animations.

For this animation, the accounts all come in from offscreen and settle down with a slight bounce. If you look even closer, the main view recedes to shift the focus to the alternate view.

In addition to this fun animation, Tweetbot 3 has a really cool Quick Tip presentation the first time the app loads and an interesting way to dismiss images.

Facebook’s Paper is a news app with a distinct user interface. Embracing its name, the app has great paper-like animations like the one shown below.

The fold effect is very well done here, and by locking into place after the animation occurs, the user can read the article almost immediately. Animations are supposed to enrich the user experience, and not get in the way, which Paper does flawlessly.

Snapchat is the popular photo-messaging app that has continued to make headlines since its initial launch. While the app originally only supported photo-messaging, a new update has brought a new text-messaging feature, video calls, and several fun animations to top it off.

When the user scrolls to the bottom of the table, the ghost shoots a basket and the ball bounces right back to him. While the animation does not make the app any more functional, it makes the app more fun to use and defines its personality.

The new update also brings a fun dancing ghost when the user reloads and shooting stars when the user scrolls to the bottom of another table view.

Flickr has one of the most beautiful introductions to an app ever. The clip below does not fully do it justice— I highly recommend downloading the app to at least see this intro.

Of all the transitions, my favorite is the camera. The reflection on the lens changes based on its angle, and the 3-D effect is really interesting to watch.

Flickr also sports a cool pull-to-reload animation and a nice transition to the camera.

Nike’s Making is an app that shows the uses of certain materials when manufacturing products like shoes or clothes. The animations truly are spectacular, especially the one shown below.

As the user scrolls, the cells move almost gelatinously. Rather than the normal cells most apps use, Making’s cells move more freely, which definitely makes the app stand out.

Making is full of fun animations, including a fold-out table and animated graphs.

Flight is a flight-tracker that tells the user about information like the flight’s status and the weather at both airports of the trip.

The plane flies offscreen as the user scrolls, and a new plane comes in from the other side. Even more impressive is that the incoming plane lands gracefully and in a realistic way, with such detailed precision.

Flight also has great animations for adding a new flight and viewing more details. It also changes its animated background based on the current weather at the selected airport.

Noted is exactly what it sounds— an alternative notes app. This notes app, though, has an extremely rich user interface with great animations.

When swiping across the screen with two fingers, the note deletes by breaking apart into nice pieces until the note is gone. Recovering the note (by shaking) is animated by the pieces joining back together.

In Noted, there are also bouncing dynamics to the notes and a nice pinch-to-show-all-notes animation.

Taasky is an intuitive to-do list with great animations. It works very well, and it looks great at the same time.

This app’s animations are very fine-tuned and fit perfectly into the experience. They make navigating the app and creating new items extremely simple and enjoyable.

Taasky also has a great presentation for group selection and a clean animation for organizing tasks.

Peek, my last nomination, is a calendar app that is beautiful as well as useful.

This app utilizes several techniques to create the best possible user experience— color and contrast is used to differentiate between the months and seasons, vibration and sound is used to give the user confirmation, and animations tie everything together into a very nice package.

When the user pulls down from the top of the table, resistance prevents the scrolling from going too fast. After pulling down far enough, the previous week shows up and a pop sound effect or a vibration gives the user confirmation.

Peek also has its own great folding animation to reveal events and a very cool way to add new events.

In the comments below, let us know all the great apps and animations you have seen. The apps we will choose from the nominations will be featured in a follow-up Best iOS 7 Animations article on this site.

This is impossible without the contributions of readers like you!

I cannot wait to see the great apps and animations you nominate!