Android TV differs a bit from Android phones. The main differences are showing the user interface (UI) on a large screen and needing to use a remote to navigate through options. In this tutorial, you’ll create an Android TV app for viewing raywenderlich.com YouTube channel videos!

In the process, you’ll learn:

Android TV contains the Android system. If you know how to build layouts for Android Phones or Tablets, you’ll find building TV layouts pretty easy. TV apps have the same code structure as those for phones and tablets.

There are some caveats and requirements, though. Your app has to fill some criteria to be available from Play Store on Android TV. For example, you have to declare a TV Activity — more on that later.

To get started, download the Netderlix project using the Download Materials button at the top or bottom of this tutorial.

Wait for the project to sync. Then, build and run the project on a phone or existing phone emulator. For now, it’s fine to run the app this way because you’ll set up a TV emulator shortly. 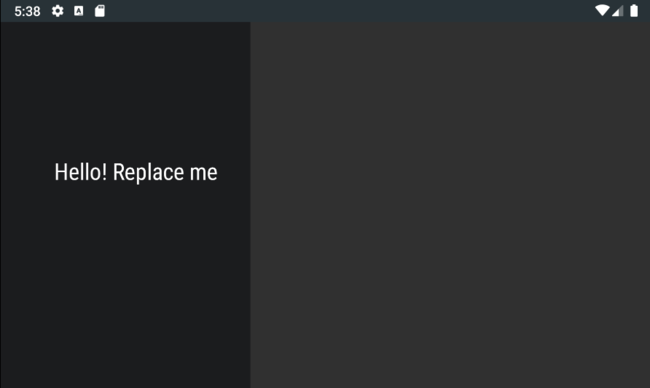 You see the main (video catalog) screen that you’ll fill with videos from raywenderlich.com YouTube channel.

Note: To build apps for TV, you need to have SDK tools version 24 or higher. Find instructions on how to update SDK tools in the official documentation.

First, get familiar with the code. The following graph shows all the screens in the Netderlix app: 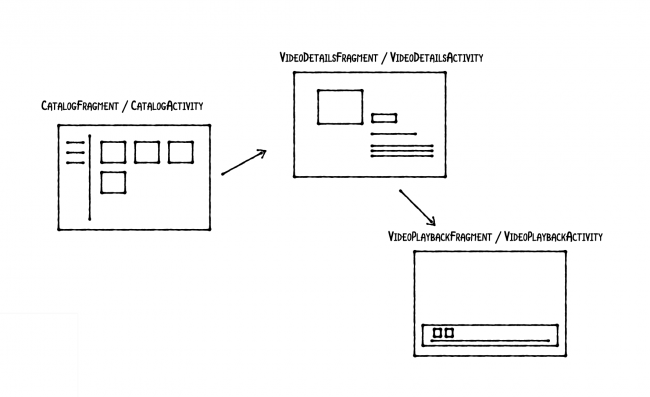 There are three screens:

Code in the project is organized in the following way:

Now, you’ll set up an Android TV emulator so you can test your new app. Feel free to skip the next section if you already have a TV emulator (or real Android TV) set up.

The simplest way to test your Android TV app is to use an Android TV emulator provided by Android SDK. To set SDK up, select Tools ▸ SDK Manager in Android Studio. 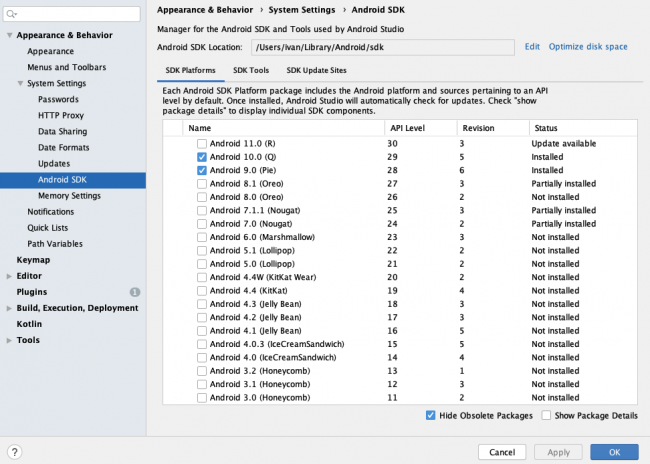 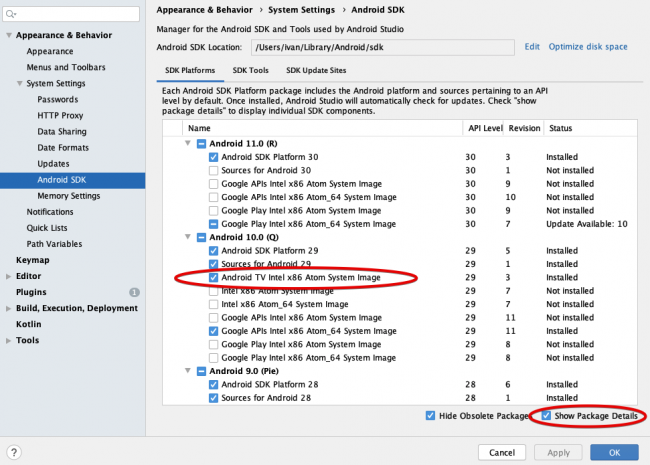 Tap OK, confirm changes on the dialog and wait for the download to complete if needed.

Now, you have to create an Android TV emulator to test on. Open Tools ▸ AVD Manager in Android Studio and click Create Virtual Device. 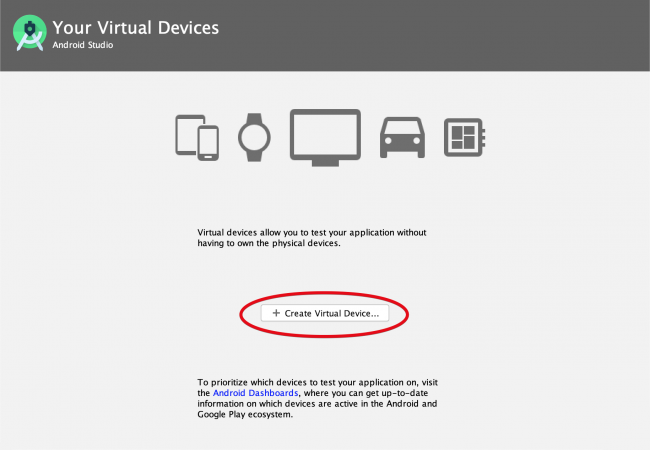 If you already have some emulators set, you see a bit different AVD manager screen. 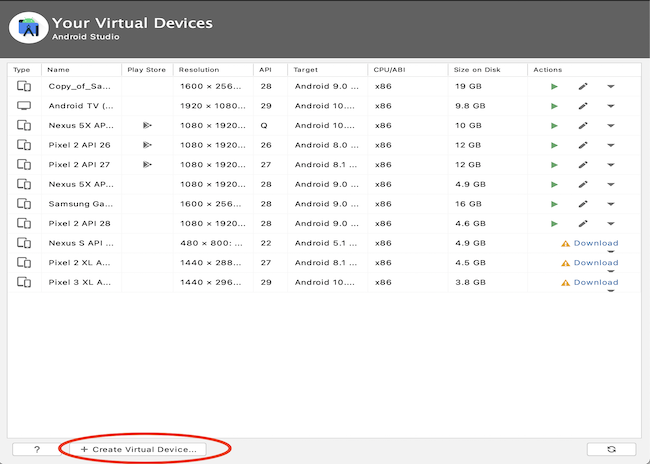 In the wizard, select TV under Category. 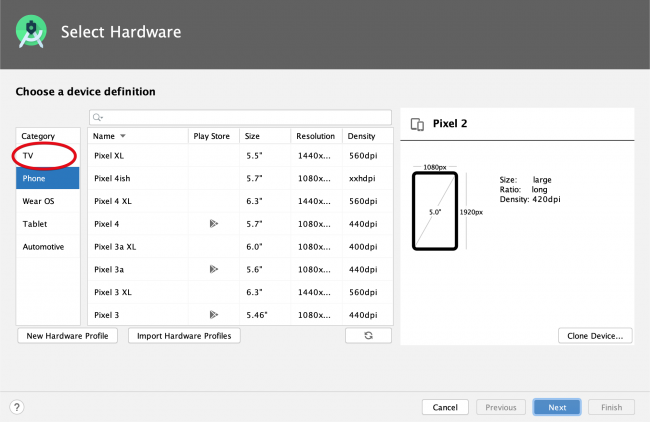 Select Android TV (720p) and click Next. It emulates smaller TV screens so it uses less computer memory when running. 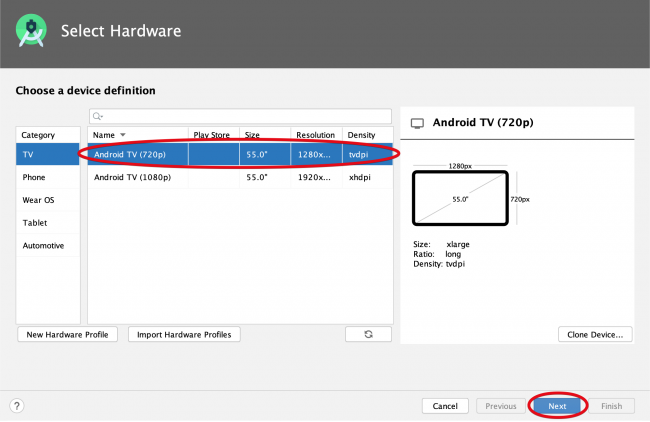 On the next screen, select Android 10.0 and click Next. 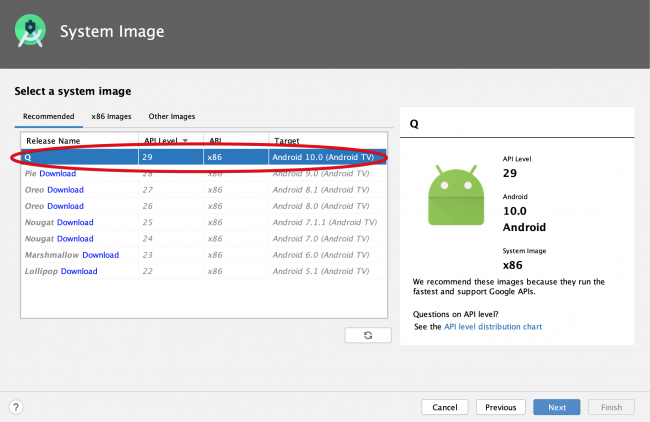 Finally, click Finish and wait a few seconds for the new device to set up. 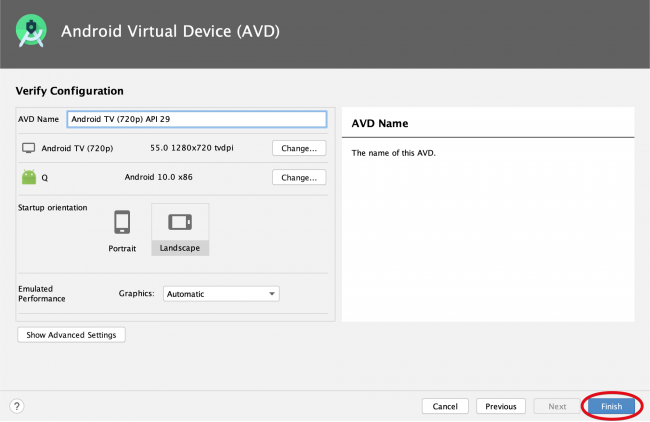 Build and run on the new TV emulator. 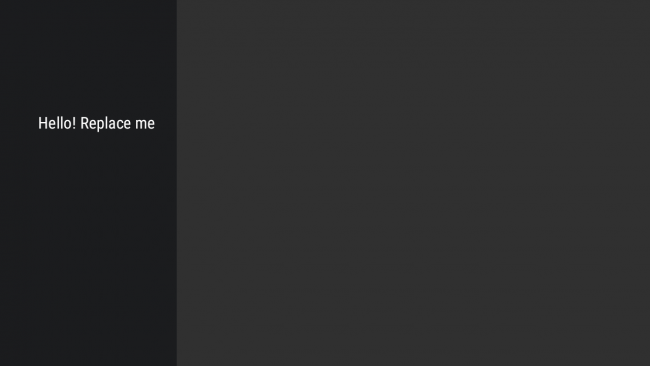 There are two key things to note when building user interfaces for TV devices:

Note: Leanback library includes a special theme — Theme.Leanback. It’s recommended to use it with Leanback classes. The theme doesn’t include an action bar because it’s not supported in TV apps. If you try to use AppCompatActivity, which sets up action bar, you get an error. For more information, check the official documentation.

To get a sense of how the Leanback library works, look at a diagram that shows the most important classes: 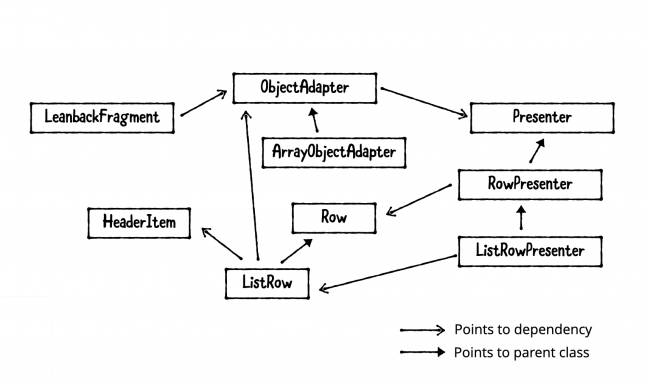 LeanbackFragment represents any of the Support fragments provided in the library. You’ll use three of them:

You can think of each of the fragments as a RecyclerView. It renders rows provided by an adapter. The adapter is a subclass of ObjectAdapter, which relies on a subclass of Presenter. It converts adapter items into View instances displayed in Fragment.

ObjectAdapter items can be any type if you provide Presenter implementation that knows how to convert that type to View.

There are two existing types of presenters:

Now that you’ve learned about the Leanback library, it’s time to meet the requirements and make a bona fide Android TV app.

Open AndroidManifest.xml and replace category in intent-filter with the following:

The second requirement is to declare that the app uses the Leanback user interface required by Android TV.

Below the previous code, add:

This declares that the app doesn’t require a touchscreen.

Note: If you don’t declare that the app uses Leanback and doesn’t require a touchscreen, Play Store won’t make it available for Android TV devices.

The last requirement is to add launcher banner. The drawable for launcher banner is already included in the project under res/drawable/banner.xml. To set it up, add a new property to application: 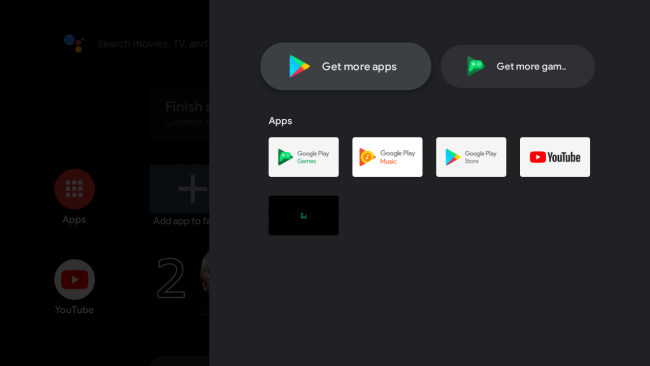 The first screen of the Netderlix app is pretty empty at the moment. The idea is that it shows a catalog of available playlists and videos from the raywenderlich.com YouTube channel. The user can play and select each of the videos to see the details.

Open CatalogFragment.kt. It already extends BrowseSupportFragment and contains code to initialize the YouTube API for fetching videos and playlists. It’s hosted in CatalogActivity and is set up to launch when the app starts on TV.

The first thing to do is to form the title and headers. In CatalogFragment.kt, create setupTitleAndHeaders():

Now, go over it step by step:

Call it from onActivityCreated() before calling loadPlaylists(). Your code will look like this:

Build and run. Notice the added title and new color of the section on the left. 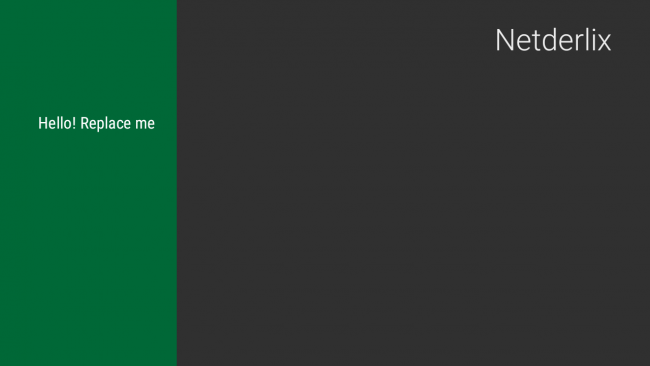 As mentioned before, you can imagine as if CatalogFragment contains a RecyclerView. The Leanback library uses a subclass of Presenter to render the contents of each item. Presenter manages creating and binding view holders for ObjectAdapter. Each video item in the catalog will be an item of type VideoItem.

Open CatalogCardPresenter.kt and create custom Presenter. There are three functions you have to override:

The first one is already implemented. It initializes colors and sets up the background.

Add the following to onBindViewHolder():

This clears the image from ImageCardView so garbage collector can free occupied memory.

Build project to make sure there are no compile errors.

The next thing to do is to fill the catalog with videos.

Go back to CatalogFragment.kt and find loadAndShowPlaylists(). Replace all the code from its body with:

This code creates an adapter for catalog rows and a custom presenter.

To make loading of YouTube API playlists easier, find loadPlaylists() and notice it takes two arguments: a success function for providing results and an error function.

The success function has three arguments:

The system calls success function for each fetched playlist. Playlists come in batches (or pages) so if the current playlist is the last one in the batch, the last argument is set to true.

Add the following lambda at the end of loadAndShowPlaylists():

Following this code, you:

Add this code at the end of loadAndShowPlaylists():

Here, you start the progress bar and video loading. Note that you’re passing showError() as a second argument. It’s provided in the starter project and shows a fragment with an error message.

Finally, below the previous code add:

Build and run. You’ll get an error message because the YouTube API key isn’t set up yet. 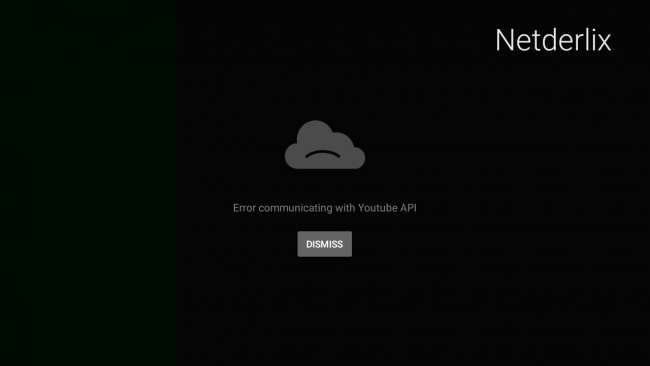 After you’ve set up the YouTube API key, open your local.properties file and add the following line:

Build and run again. If you attached the key properly, you see all the videos from the raywenderlich.com channel! 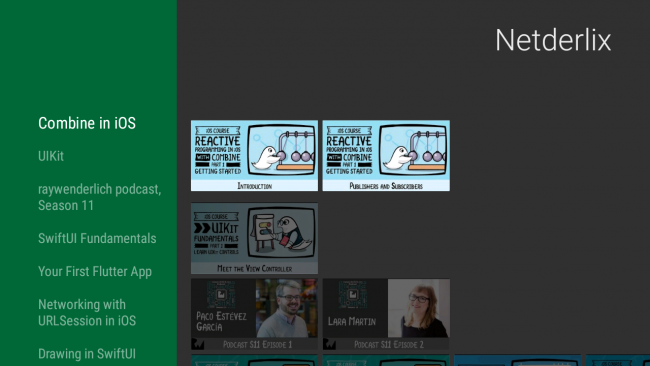 Note: If you still receive an error make sure that you emulator is able to access the internet and your youtube API key is enabled.

Last, in CatalogFragment.kt, call initializeBackground() at the end of onActivityCreated(). Your code will look like this:

Build and run. You can see the background changing as you select videos.

Once the video card is selected, you need to show its details. To set up listeners, add the following in onActivityCreated():

This listener checks if the clicked item is VideoItem. If so, showVideoDetails() creates Intent for starting VideoDetailsActivity.kt and sets up a shared transition for the thumbnail.

Note: For more details on makeSceneTransitionAnimation() in Util.kt, check the official documentation.

Build and run. Select a video, and you’ll see a black screen. This will be your next task. 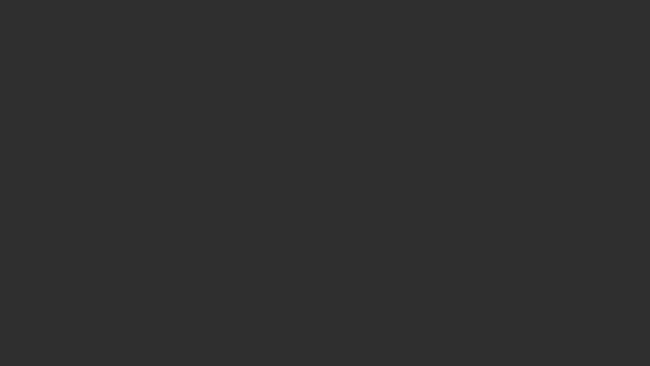 First, add a function that creates an adapter for actions available for the video:

The function creates an instance of ArrayObjectAdapter with a single Action item. The item represents action to watch the video that also passes the respective title and subtitle.

Now, create a function that creates a details row:

This function creates the first data row. It contains details for the video: thumbnail, description and action for playing the video.

Then, add a function that handles actions:

It checks whether the action has ID ACTION_WATCH and, if it does, starts VideoPlaybackActivity.

Now, create a function that creates a presenter for the details row:

Through these steps, you:

This function returns ClassPresenterSelector with a proper presenter instance depending on the class of the rendering item:

Here, you get VideoItem passed from arguments.

Then, add the code at the end of onActivityCreated():

With these lines, you create and assign an adapter for VideoDetailsFragment.

Build and run. Select a video, and you’ll see the new details screen. 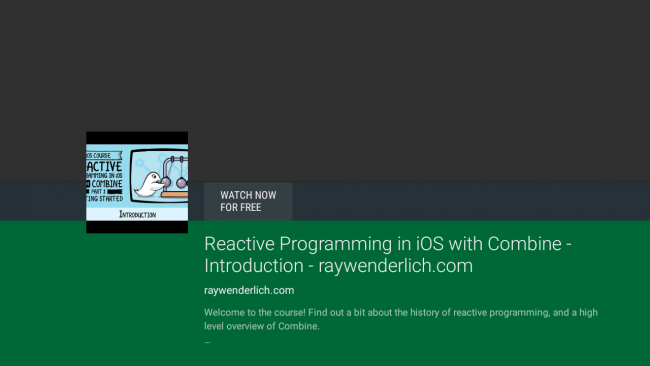 Add a new function for creating recommendations to VideoDetailsFragment.kt:

Here is the explanation. You:

Add the following line at the end of the apply block in onActivityCreated():

Build and run. Open details for a video and navigate down to see recommended videos. 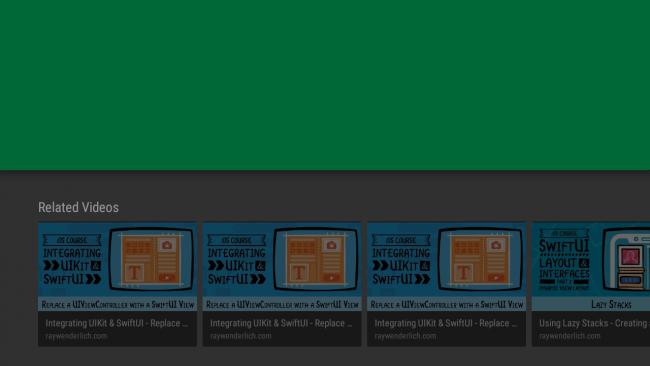 Set an item click listener by adding the following code to the end of onActivityCreated():

In this code, you present video details just as you did for catalog videos.

Build and run. Select a video recommendation to see the details of that video.

To add a final touch to the details screen, call initializeBackground() at the end of onActivityCreated():

Build and run. You’ll see the background on the details screen now. 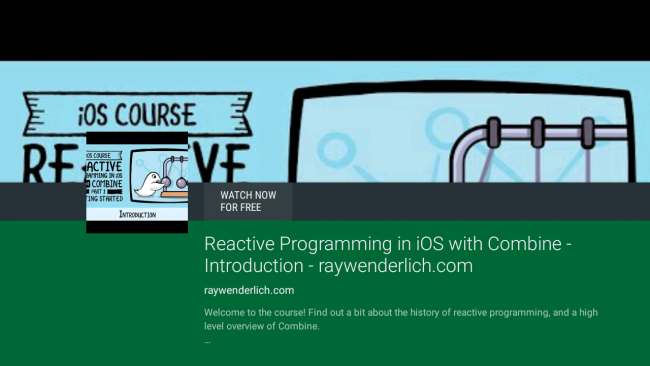 Select any video from the catalog and open its details. Then, select Watch Now For Free. 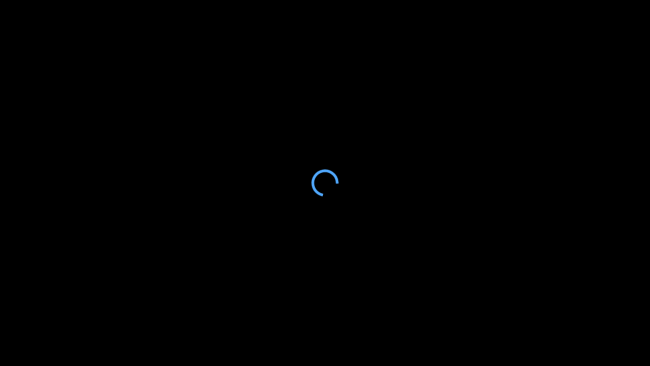 And now for the most important part — playing the video.

The only supported way of playing YouTube videos currently is using its IFrame player from WebView.

You’ll use a library that wraps the IFrame player into View.

Leanback has a specific way of separating UI video playback controls from the video player. The following diagram shows the classes: 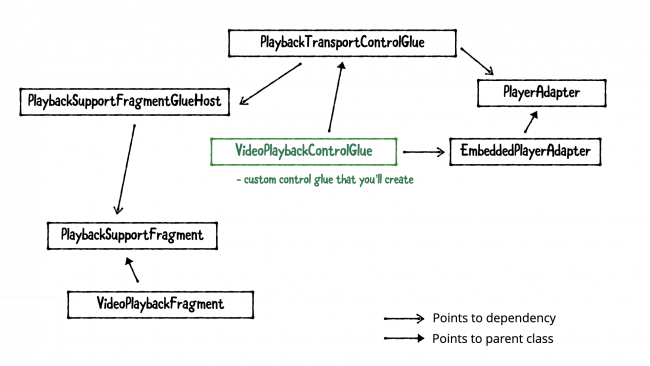 This setup looks complicated at first, but it just separates video player logic from Fragment that displays video and controls.

To add support for your video player, you extend PlayerAdapter and PlaybackTransportControlGlue. For playing YouTube videos, you’ll use EmbeddedPlayerAdapter, which is provided in the project.

First, you have to finish implementing VideoPlaybackControlGlue, which communicates with EmbeddedPlayerAdapter.

Then, initialize actions in onCreatePrimaryActions(). Add this function at the end of the class:

Leanback calls this function when it creates a row of primary video controls. Here’s what it’s doing:

Add the following line at the end of next():

This calls next() from EmbeddedPlayerAdapter once the user clicks the Skip Next action.

And add the following at the end of previous():

This line calls previous() once the user clicks the Skip Previous action.

Add the following to onActionClicked():

This handles the remaining actions. If the action is not recognized, let the super implementation handle it.

Now, open VideoPlaybackFragment.kt and add this code to the end of onCreate():

With this code, you:

Note: Check onCreateView() to see initialization of the YouTubePlayerView. For more information on all the available properties, you can check android-youtube-player library.

Now, build and run and start a video! 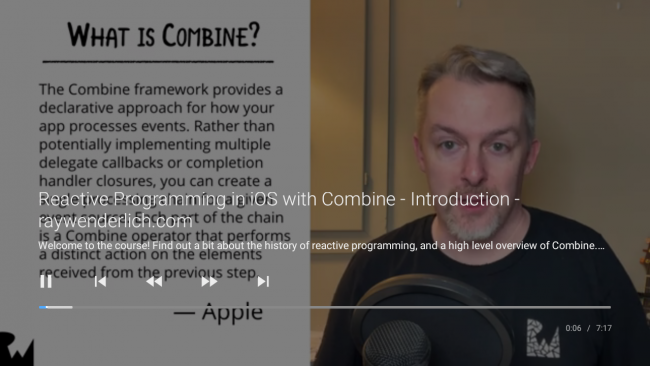 You can download the complete project using the Download Materials button at the top or bottom of this tutorial.

If you want to know more about this topic, make sure to check out the official documentation for building Android TV apps.

Also make sure to check other available libraries for Android TV.

Hopefully, you’ve enjoyed this tutorial on creating an Android TV app. If you have any comments or questions, please join the forum discussion below!