In this Unit Testing with Mockito tutorial for Android, you will learn how to refactor an app in a way that makes it easy to write unit tests in Kotlin using Mockito.

The need for writing tests in software development is often underestimated and relegated to later stages of a project. Sometimes not writing any tests is considered right for mobile apps.

You may have heard several excuses, a few of which are:

Some companies even have separate teams that focus on specific features. And often, there’s another team that has to:

This increase in code complexity and team collaboration may jeopardize the proper functioning of your application.

Writing good tests can cover this!

In this tutorial, you’ll be refactoring a starter project to use the Model-View-Presenter presentation architecture pattern and write unit tests using Mockito.

But first of all, let’s take a look at the testing pyramid. 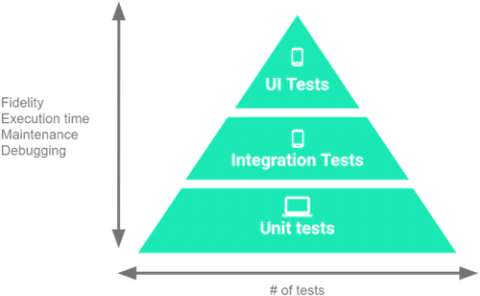 The Testing Pyramid, showing the three categories of tests that you should include in your app’s test suite

A typical rule of thumb is to have the following split among the categories:

Because unit tests are so important in the testing pyramid and also easy to write, this tutorial will focus on them.

Download the starter project. Extract the zip file but don’t open the project in Android Studio yet.

You’ll be working with this simple app named “IngrediSearch” that allows users to search for recipes and favorite them.

Note: For this app to work, please ensure the following: 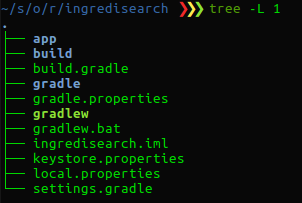 With the keystore.properties file added, open the project in Android Studio 3.0.1 or greater.

Build and run the project to become familiar with the application features.

Before you start unit testing, it’s best to ask one very important question…

Is this unit testable?

By checking the source code you will find:

Logic in the Activities

When the user clicks the search button:

To perform a search:

Adapter doing too much logic

Inside this same activity, you’ll find:

Because these are so embedded into the Android activities/adapter, they are not efficiently unit testable. A refactor must be done!

You’ll refactor the project to the Model-View-Presenter structure. This will ease the creation of unit tests.

Note: If you already know about MVP you can skip to the next section where the project is already refactored to MVP and ready to write unit tests.

Therefore, create a new class by right-clicking on the com.raywenderlich.ingredisearch package and choosing New-Kotlin File/Class. Name the class SearchPresenter and add the following:

Now, open SearchActivity and modify it to the following:

You may have noticed that you’re repeating the attach/detach logic here, so let’s create a BasePresenter:

Now extend from this class, remove the view property and the attach/detach methods:

Now, open SearchResultsActivity and modify it to the following:

Now that the refactor was done, you’ll be able to create unit tests.

Build and run the app and make sure the app behaves just as it did before the refactor.

You can also download the MVP refactored project if you want to. Remember to add the keystore.properties file in order to open the project.

Open the application’s build.gradle file and add the following dependency:

Mockito-Kotlin is a wrapper library around Mockito.

It provides top-level functions to allow for a more idiomatic approach and also solves a few issues with using the Mockito java library in Kotlin. Check its wiki for more information.

In state verification, you first have the system under test (SUT) configured with all the necessary dependencies (setup phase). Secondly, you perform a certain operation (exercise phase). Finally, you examine the state of the object and verify it’s the expected one (verification phase). This is sometimes called black-box testing. Usually, JUnit is used for this.

In behavior verification, instead, you specify which methods are to be invoked on the dependencies, in other words, you setup expectations, thus verifying not that the ending state is correct, but that the methods were invoked correctly. This is sometimes called white-box testing. Usually, Mockito is used for this.

At last, it’s time for some unit testing! :]

You’ll create a unit test that verifies that the presenter calls the view’s showQueryRequiredMessage when an empty search is performed.

Add a new class called SearchTests, with the following content:

Now to run the test, press on the little green arrow (the arrow will have a circle after the first run of the tests) to the left of the class declaration:

Hopefully you’ll get all green! :]

Because all SearchTests will basically share the same setup, you should add a setup() function with a @Before annotation as follows:

The function marked @Before is executed before any test, therefore it’s a good place to setup objects/mocks. It’s also common to see a tearDown() function marked @After in test classes, which is run when a test completes.

Modify your first test with the following:

Verify a method is never called

You can also test that a function is never called by adding the following test:

Note: Android Studio will mark never() as an unresolved reference. Make sure you import the com.nhaarman.mockito_kotlin option which is the Mockito wrapper.

Before proceeding to create these tests, it’s important to mention that Kotlin classes and methods by default are final. Mockito won’t work with final classes/methods, but there are a few workarounds:

Because in the following tests you’ll mock the repository, we’re going to take the interface approach.

Add the override keyword to the corresponding methods (also, be sure to remove RepositoryCallback from RecipeRepositoryImpl if you added it into the interface file).

Also, open SearchResultsPresenter and modify it to use the interface:

And fix the anonymous RepositoryCallback:

Add a new class called SearchResultsTests to the test package:

Try and run these search results tests using the green arrow next to the test class name.

Now, create a test that stubs the response of the recipes repository and verifies that the presenter calls showRecipes on the mocked view.

Go ahead and run the new test to make sure all is good.

The following test is just a JUnit test:

Run the test to make sure the state of a recipe is changed correctly when marked as a favorite.

Before creating the tests, open RecipeRepositoryImpl and look at the following functions:

You’ll create a test that verifies this behavior.

Now, recall that Kotlin by default has final classes and final methods (unless you use the open keyword).
So, instead of adding the open keyword to the RecipeRepositoryImpl class and methods, create a text file under app/src/test/resources/mockito-extensions called org.mockito.plugins.MockMaker with the following content (it may be easier to switch to the Project view in the Project pane in order to add the new directory and text file):

This will enable you to mock/spy on real classes without adding the open keyword.

Add a new class to the test package called RepositoryTests with the following content:

Go ahead and run the repository tests to see the spy in action!

You can download the final project here. Remember to add the keystore.properties file in order to open the project.

In this tutorial, you added the unit tests after writing the code. In Test Driven Development (TDD), you write the unit tests first and only add code to pass the currently failing unit test.

I suggest reading the following:

For even more testing practice, check out our book, Android Test-Driven Development by Tutorials.

I hope you enjoyed this tutorial, and if you have any questions or comments, please join the forum discussion below!