It’s the iOS 9 release date, and you know what that means: time to party! 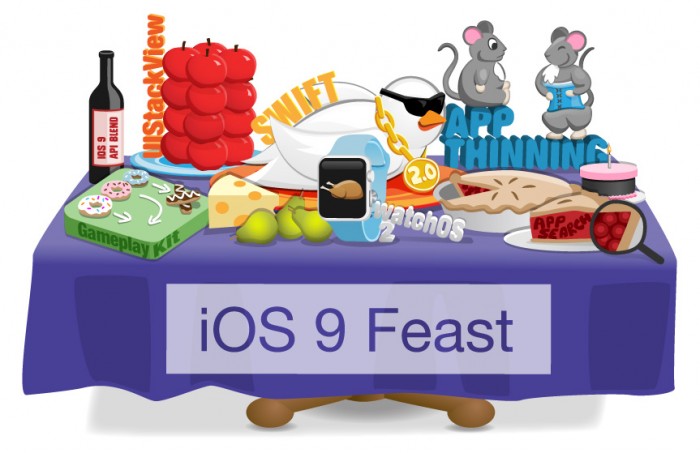 The iOS 9 Feast consists of 9 courses:

During the iOS 9 Feast, we’ll help you get fully up-to-speed with iOS 9, Swift 2, tvOS, and watchOS 2 development, no matter how you prefer to learn. You’ll learn about UIStackView, iOS 9 Search APIs, Swift 2 error handling, GameplayKit, and much more.

Plus, we have over $18,000 in giveaways for lucky readers – our biggest giveaway yet! 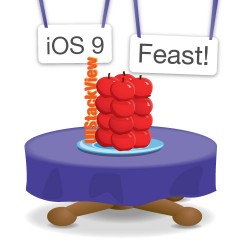 One of the most exciting new features in iOS 9 is the brand new UIStackView class, which makes creating cool customized layouts a snap.

We think you’re going to love it, so Jawwad Ahmad from the Tutorial Team has written a beginning UIStackView tutorial to show you the basics.

This tutorial is currently scheduled to run later this month. But what if you want it right now?

All you have to do is retweet this post to help get the word out! If/when the post reaches 100 retweets, we will immediately post the UIStackView tutorial to whet your appetite. 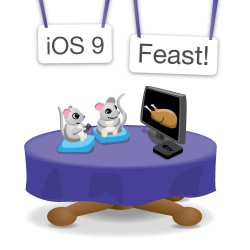 As you know the Tutorial Team and I have been digging into tvOS ever since it was launched last Wednesday.

Kelvin Lau has been hard at work from day one making an awesome tutorial to help get you started with making your own tvOS apps with TVML! If this post reaches 200 retweets, we’ll release Kelvin’s tvOS tutorial early as well.

Get started with tvOS and UIStackView early – just click the button below! 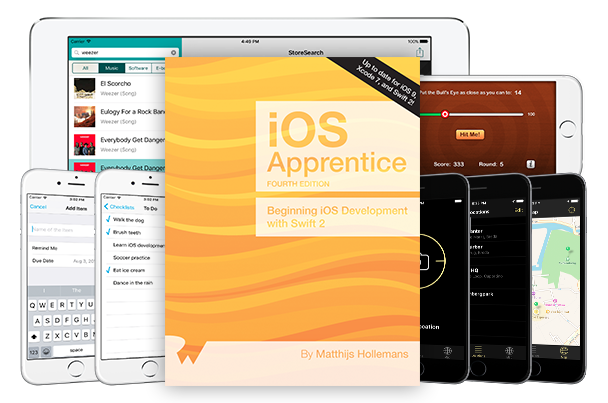 The iOS Apprentice is our book for complete beginners to iOS development. It has a series of epic-length tutorials that each show you how to build four complete apps from scratch.

In this update, Matthijs has completely updated the text and illustrations for Xcode 7, iOS 9, and Swift 2 to help get you fully up-to-date with the latest and greatest improvements in Apple’s development environment and programming language.

And best of all – this book is 100% complete and available today!

This is a free update for existing PDF customers – you can download the update on your My Loot page.

Did you know that iOS Apprentice was first written for iOS 5, and Matthijs has updated it for every version of iOS since then for free? You can’t beat that value! :] 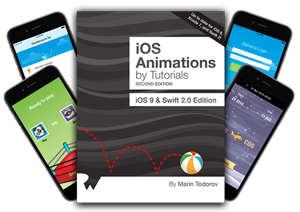 Next, we are happy to announce the second edition of Marin Todorov’s popular book iOS Animations by Tutorials!

iOS Animations by Tutorials teaches you how to make delightful animations in your apps with Swift 2. You start with basic view and layer animations, move all the way through Auto Layout animations, view controller transitions, and finally look into third party animation libraries like Facebook’s Pop.

In the second edition, Marin has added 3 brand new chapters to the book:

This is a free update for existing PDF customers, as our way of thanking you for supporting this site.

As part of the iOS 9 Feast, we are releasing a new iOS 9 book each week. iOS Animations by Tutorials Second Edition will be released next Wednesday, Sep 23.

We can’t wait to show you the new edition of the book, and Marin and I hope you enjoy the new chapters! 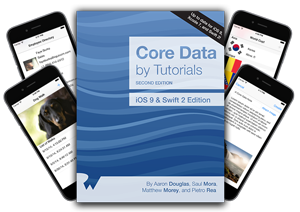 There’s yet another update to announce – the second edition of Core Data by Tutorials!

Core Data by Tutorials teaches you everything you need to know about Core Data, starting with the basics like setting up your own Core Data Stack and moving all the way to advanced topics like syncing with iCloud, migration, performance, multithreading, and more.

The second edition of the book is fully updated for iOS 9 and Swift 2. Here are some of the changes in this update:

This is also a free update for existing PDF customers, and will be released on Wednesday, Sep 30. We hope you enjoy! :] 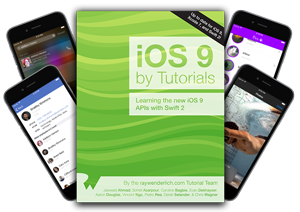 So far we’ve been talking just about updates – now let’s talk about some new books!

The first new book is one you might have been able to guess :] That’s right, it’s our 5th installment of our popular iOS by Tutorials series!

iOS 9 by Tutorials is a book for intermediate and advanced iOS developers looking to learn the new APIs introduced in iOS 9 quickly and easily. Here’s a quick preview of what you’ll find in the book:

This book is a result of the hard work of 9 members of the tutorial team, dividing and conquering the material. We went through the school of hard knocks, so you don’t have to!

iOS 9 by Tutorials will be released Wednesday, Oct 7. We can’t wait to show you the book, and we look forward to seeing you use these cool new iOS 9 APIs in your own apps. 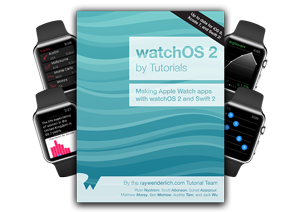 This year at WWDC, Apple introduced watchOS 2, which signifies a huge change for Apple Watch developers. Now, you can make native apps that run directly on your watch.

The switch to watchOS 2 represents a significant switch in how Apple Watch development is done, making much of our previous book WatchKit by Tutorials obsolete.

But we knew you guys would want an up-to-date resource on how to make Apple Watch apps, so we decided to make a new book – watchOS 2 by Tutorials!

watchOS 2 by Tutorials contains 11 chapters from WatchKit by Tutorials heavily revised and updated for watchOS 2, along with 17 brand new chapters covering new functionality in watchOS 2, such as:

The result is a whopping 28 chapters of content – the most comprehensive watchOS book on the market!

This book is not a free update since most of the book is completely new; it’s closer to a new book than an update. However, we are offering this book at 50% off for WatchKit by Tutorials PDF customers to thank you for your support – we’ll send you a coupon code on the release day.

watchOS 2 by Tutorials will be released Wednesday, Oct 14 – set a reminder on your watches! :] 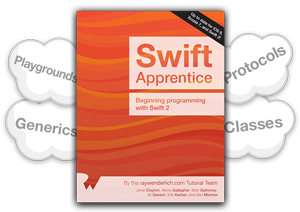 Last year, we wrote a book called Swift by Tutorials. This book was geared toward intermediate to advanced iOS developers who already knew Objective-C iOS development, but wanted to quickly transition to Swift.

Now that Swift is open source and growing in popularity, this restriction of prior iOS/Objective-C experience just doesn’t make sense. So we decided to rethink the book completely, and rewrite it from scratch – enter the Swift Apprentice!

The Swift Apprentice is a book geared toward complete beginners to Swift. The book focuses on the core language itself, and platform agnostic – for example, all examples in the book run in Playgrounds!

Here’s a sneak peak of what’s in the book:

Swift Apprentice is a completely new book, in a very different style from Swift by Tutorials. However, since there’s some overlap in the topics covered between these two books, we’re offering a 50% off discount for Swift by Tutorials customers to thank you for your support – we’ll send you a coupon code on the release day.

The Swift Apprentice will be released Wednesday, Oct 21 – get your Playgrounds ready! :] 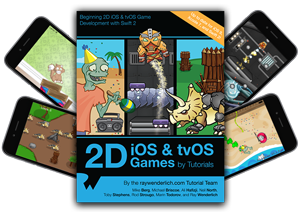 As a gamer, to me the biggest and most exciting changes released in iOS 9 this year was the new GameplayKit APIs. These are a set of APIs that make it easy to add pathfinding, AI, and other cool features into your games.

Then there’s the elephant in the room – tvOS, which now allows us to create games for the living room!

2D iOS & tvOS Games by Tutorials teaches you everything you need to know about SpriteKit, GameplayKit, and related APIs like Game Center and ReplayKit. The book contains the classic games Zombie Conga, Cat Nap, and Circuit Racer (with plenty of updates along the way), but also introduces three new games to highlight the power of GameplayKit:

This book is not a free update since over half of the book is completely new; it’s closer to a new book than an update. However, we are offering this book at 50% off for iOS Games by Tutorials PDF customers to thank you for your support – we’ll send you a coupon code on the release day.

2D iOS & tvOS Games by Tutorials will be released Wednesday, Oct 28 – get ready to game on! :]

That all sounds great,” you may think, “but what about video tutorials and written tutorials?”

Don’t worry, we’ve got you covered as well :]

For the next month, we will be releasing a new book every Wednesday, a new video tutorial series every Thursday, and a new written tutorial every other day of the week! 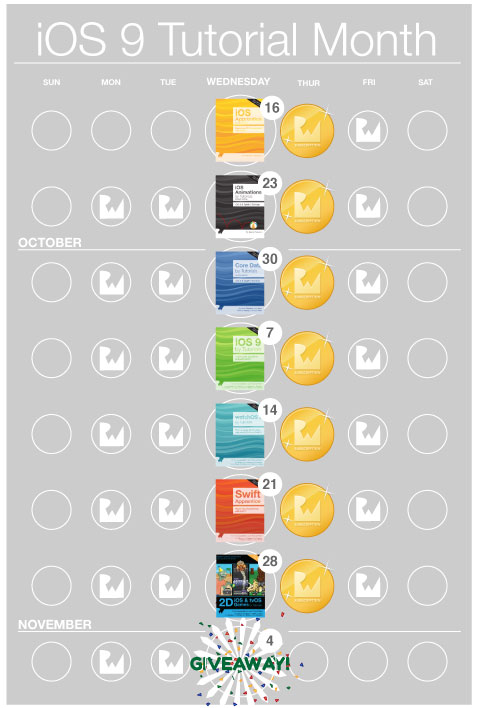 Here’s the release schedule for your convenience:

Be sure to check back every day for a new free tutorial, book, or video tutorial series.

Last but not least, we have a particularly sweet ending to the feast this year.

I asked the Tutorial Team what their favorite iOS tools were, and then asked the teams behind these tools if they’d like to join the Feast on an invite-only basis.

Tons of folks were kind enough to donate copies of their tools to join in the celebration – making the most epic collection of iOS dev tools ever!

The grand prize winner will receive a massive prize pack of 45 prizes split into 13 categories:

In total, the grand prize winner will receive over $8,000 in value!

Do you wanna be this guy? Make your first entry into the contest by clicking the button below!

Huge thanks to all of our sponsors and friends who helped make this massive giveaway possible. Don’t thank us – thank them for putting the community first!

Please be sure to check out their pages – these are the tools and conferences we know and love, and they are must haves for serious iOS developers.

Note: To be eligible to win the grand prize, you must be based in either Europe or the US. If you’re in another country, don’t worry – you are eligible for the other 150 prizes listed below! :]

We want to give as many people as possible a chance to win. So in addition to the grand prize winner, we’ll be giving out a bunch of bonus prizes to 150 random retweeters!

To be eligible for this epic giveaway, all you have to do is send one or more tweets during the iOS 9 Feast with the #ios9feast hashtag.

You can retweet posts with this hashtag (including this one!) or just send general comments. It’s OK to submit as many tweets as you like (as long as you aren’t spamming of course!) We will choose random winners from all of the tweets marked with the #ios9feast hashtag, and they’ll get the epic loot!

Want to make your first entry? Just tweet this post with the #ios9feast hashtag by clicking the button below!

The random drawing will be in 7 weeks, when the iOS 9 Feast is complete. So make your entries early and often! :]

If WWDC this year was like Christmas for iOS devs, then this has gotta be our Thanksgiving :]

To sum it all up, here’s what you need to know:

The Tutorial Team and I hope you enjoy this feast, and that you’re fat and happy by the end!

Stay tuned for a bunch of great iOS 9 and Swift 2 tutorials, and if you have any questions or comments about the iOS 9 Feast, please join the forum discussion below!